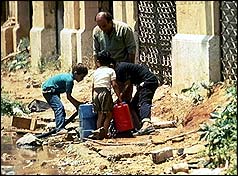 At least 45 people have died and 175 have been injured in a car bomb explosion in Beirut, Lebanon.

The bomb went off outside a block of flats and close to a mosque as worshippers were gathering for Friday night prayers in a densely populated Shia Muslim suburb.

It is the worst attack in the Lebanese capital since November 1983 when 61 people were killed in a suicide car bomb attack in the southern port of Tyre.

The bomb blew a huge crater in the street and destroyed two seven-storey blocks of flats, a mosque and a cinema. Many of the dead were passers-by.

The blast brought gunmen running on to the streets firing guns into the air to clear the roads for ambulances.

Radio stations broadcast appeals for blood donors as fire fighters and civil defence workers tried to remove bodies from under the rubble.

Fleets of ambulances jammed the entrance to west Beirut’s main hospital. It was soon packed with wounded and dead.

The bomb went off near the home of a leading fundamentalist Shia Muslim cleric, Sheikh Muhammad Husain Fadlallah and it is thought he may have been the target – although he was not hurt in the attack.

Sheikh Fadlallah later accused Israel and its “internal allies” of being behind the explosion and he gave a warning to “all those who are playing with fire” that their hands will be “burned by the flames”.

The blast comes at a particularly sensitive time as the Israelis are trying to complete their withdrawal from Lebanon.

Anti-American feeling is also running high. In Shia minds, the US is linked with Israel and its occupation of southern Lebanon.

From 1975 until the early 1990s Lebanon suffered a bloody civil war in which regional powers – particularly Israel, Syria and the Palestine Liberation Organisation – used the country as a battlefield for their own conflicts.

Israeli troops invaded in 1982 before pulling back to a self-declared “security zone” in southern Lebanon in 1985.

The final death toll in the car bomb explosion was more than 80.

Some American press reports said the CIA was behind the attack, which was meant to kill Sheikh Fadlallah. He had been accused of supporting the suicide bombers who killed hundreds of US and French troops in attacks on military headquarters in Beirut in 1983 – a charge he has always denied.

The kidnapping of American journalist Terry Anderson eight days after the bomb has also been linked to the attempt on the sheikh’s life.