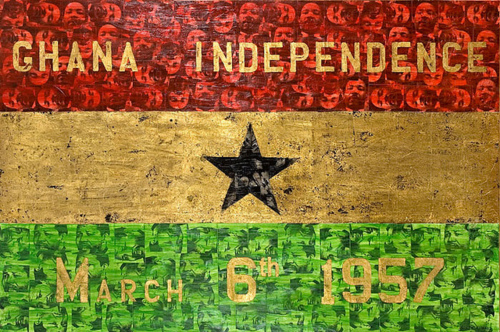 The people of Ghana have been celebrating the end of colonial rule and the dawn of their independence.

Most workers have been given the day off – tens of thousands have gathered in the capital, Accra, to greet the independent country’s first prime minister, Dr Kwame Nkrumah.

The Duchess of Kent has been attending the celebrations. Last night, she opened the Independence Monument, erected near the spot where in 1948 members of the Ghanaian ex-servicemen’s union were shot when marching to present a petition to the British Governor.

The Gold Coast Legislative Assembly was prorogued at midnight to cheers from the waiting crowd outside.

This morning the Legislative Assembly building, now the building of the Ghana parliament was packed with members dressed in their national costumes. The first Governor-General of Ghana, Sir Charles Arden-Clarke has been sworn in.

Message from the Queen

The Duchess gave a speech, setting out the Ghana Government policy. She also read out a personal message from the Queen to the people of Ghana.

In it she said: “The hopes of many, especially in Africa, hang on your endeavours. It is my earnest and confident belief that my people in Ghana will go forward in freedom and justice.”

In reply, Dr Nkrumah said: “My government fully realises both the advantages and the responsibilities involved in the achievement of independence. It intends to make full use of these advantages to increase the prosperity of the country.”

“The government and people of Ghana have set their hands to a great task. We are confident whatever may be the difficulties which will face them they will maintain and develop the principles of tolerance and freedom which are inherent in our parliamentary system. We shall give them all the help we can.”

Ghana was the first black African country to become independent.

In 1960, Nkrumah declared Ghana a republic and himself president for life in 1964. He banned all opposition parties.

He was deposed in 1966 by a military coup while on a trip to Peking. He later died in exile in Romania in 1972.

There followed a period of unstable government with one coup after another, culminating in 1992 in a referendum on a multiparty system. Flight Lieutenant Jerry Rawlings, who had already led two coups against the government, was elected president.

His supporters credit him with stabilising a turbulent political scene and leaving a legacy of democracy.

He retired in 2000 and President John Kufuor was elected.

Doug The Pug Does Halloween Better Than You