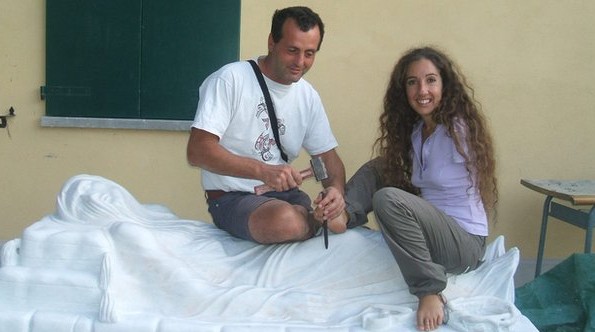 A blind Italian sculptor thinks people should have the right to touch art, though most exhibitions forbid it.

Felice Tagliaferri has a personal motto: “you are forbidden not to touch”. It’s about making art inclusive to everyone through the use of all five senses and stems from an incident which started a mini revolution.

While holding an exhibition of his work in Naples six years ago, Felice Tagliaferri took the opportunity to visit a beautiful sculpture in the city. The Cristo Velato, or Veiled Christ, was created by the sculptor Giuseppe Sammartino in the 18th Century and is much revered. But, as with most artworks on public display, the gallery wouldn’t allow the public to touch it – a problem for the blind Italian who can only appreciate art by feeling it.

Though he explained this, and that he was a professional sculptor who wouldn’t damage the piece, he was still refused.

“I left disappointed, not experiencing the sculpture in any way,” Tagliaferri says.

It was this incident which inspired the blind artist to create his most important piece to date – his own accessible version of the statue which he named the Cristo Rivelato (Revealed Christ). Far from having a hands-off policy, Tagliaferri encourages people to touch the statue.

It proved a huge success, with busloads of blind and disabled people travelling from around Italy to visit his creation, and, at the beginning of the project, disabled people also took part in carving it.

Its popularity reached as far as the Vatican, with Pope Benedict XVI touching the marble statue during its 2011 tour of Italy. 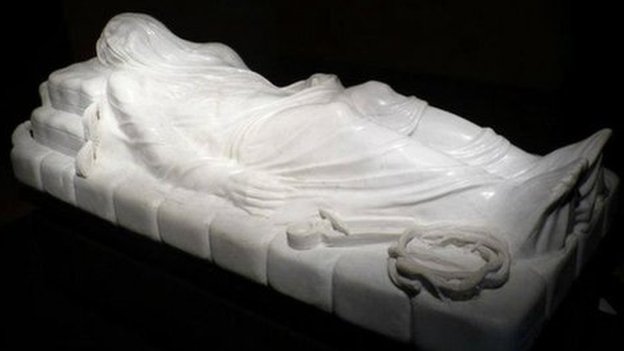 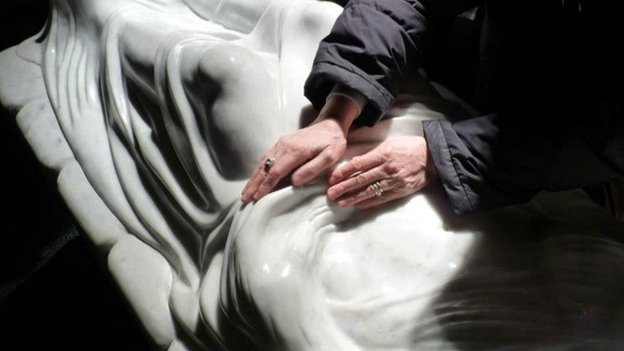 But for Tagliaferri the most important impact his sculpture had was that the Sansevero chapel where the original is kept, finally allowed blind people in to touch it. He says: “We had helped make this place accessible for blind people, and that was a big moment.”

But without getting permission to touch the original in the first place, how was Tagliaferri able to recreate it?

In the first instance, friends created a 30cm miniature version in clay so he could feel its shape and proportions. As well as this, Tagliaferri collected information from other sources to build a more detailed picture in his mind. “People who work in museums gave me a very accurate description,” he says.

Then he had to fundraise to get the $21,910 (£17156) required to buy a four ton piece of marble. City councils in the north of Italy, as well as the Italian Union for the blind and visually impaired were supportive and quickly Tagliaferri was able to continue with his ambition.

Next, to get a sense of the size it needed to be, he measured a friend lying down on top of the marble and marked the surface with a hammer and chisel.

“Then I just started chipping away, bit by bit,” he says. 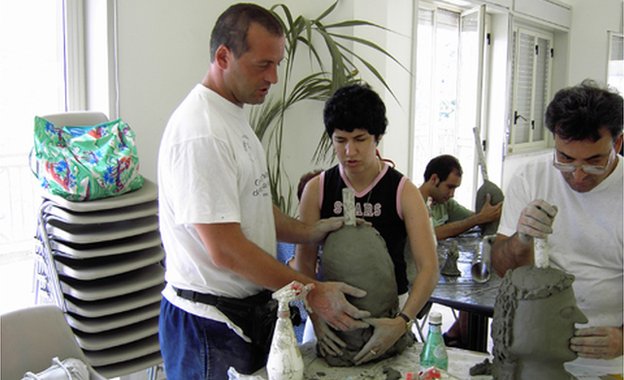 The result is quite outstanding and shows remarkable skill. The smooth finishing and delicate carving has been complimented by renowned sculptures across Europe. For Tagliaferri it isn’t surprising, it merely shows that you do not need sight to create art.

“I must have a clear idea in my mind of what I want to portray,” he explains. But it is an idea of form that he mentally conjures, not an image. It’s now 30 years since the artist went blind and he says his visual memory has faded to the point where it is just “an illusion” to him.

In his studio, in a deconsecrated church in Bologna, aspiring sculptors – disabled and not – travel to Tagliaferri’s popular workshops. It has become the main reference point for people in the north of the country pursuing disability art, he says. Anybody can attend. Anybody, that is, who wants to experience “tactile art”. Part of the session is conducted with blindfolds on, a lesson in “discovering that they can see with their hands, rather than their eyes,” he says.

The sculptor went blind at 14 but doesn’t really talk about how or why, saying the story behind it isn’t important. “It doesn’t matter how, it matters how I am without sight, the kind of person I am,” he explains. What he does say is that for a while he found it difficult to come to terms with. “I went through a difficult period that lasted for two years, before I realised I had a choice.”

The choice, he explains, was to either “stay behind the window looking out at others living their lives, or open the door and go outside and live my own life.” He chose the second path, the much more difficult and challenging one, he says, but the one that has made him happy.

Before training as an artist, Tagliaferri worked on the switchboard of Bologna’s municipal building, a job which he describes as irritable: “it paid the bills but little else”.

An opportunity then arose. When a sighted sculptor wanted to understand how important sight is to his craft, he invited four blind people – Tagliaferri included – to his studio for three sessions. “For all four of us it was the experience of a lifetime,” he says, “but for me it was life changing.

“I understood I could express myself through sculpture, the images in my head, my dreams, my thoughts, my childhood memories, and I could show them to the world.”

Tagliaferri was hooked, and once the experimental sessions were over, he asked to be taken on as an apprentice, was accepted, and stayed there for the next two years.

“I spent the time trying to steal his deepest secrets,” he says, “and then, I started out on my own, full speed ahead”.

The 15 Most Magical Streets In The World

Animal Food: My Series Of Animals Crossed With Fruits And Vegetables