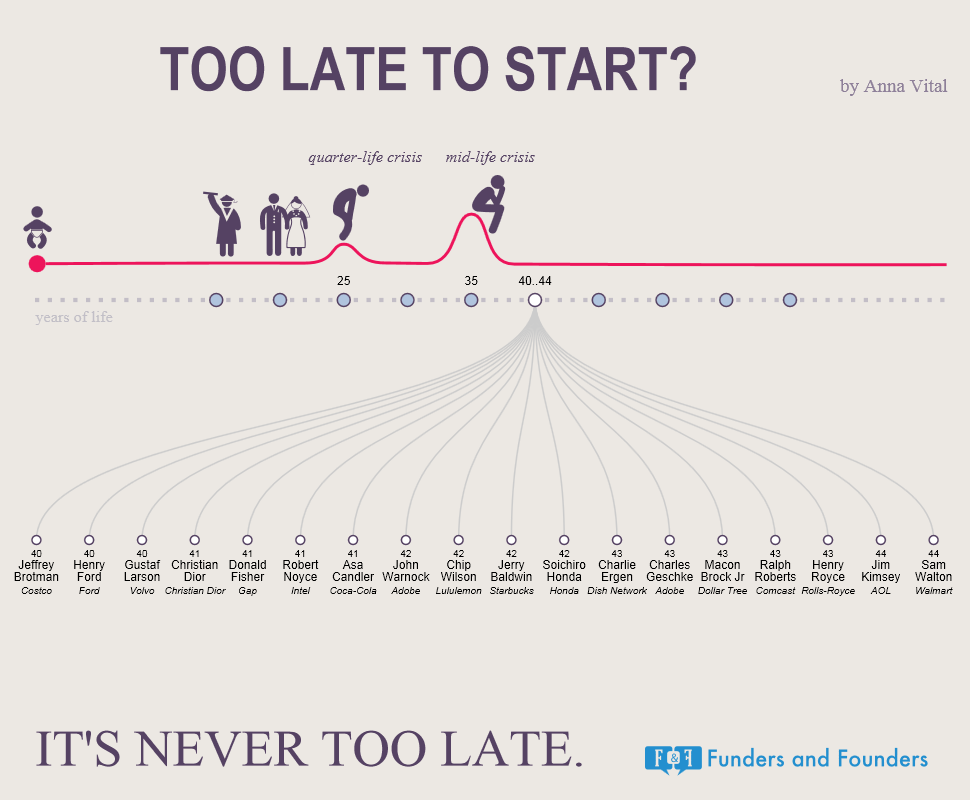 According to this infographic, designed by Anna Vital, the 40s are indeed the new 20s, as it demonstrates how a middle life crisis might turn out to be the most productive period in a person’s life.

Harli Jordan is only 10 years old and he is already chief executive at Marble King. He developed his obsession for marbles into a successful company that now sells special marbles at a price tag up to 1000 dollars. And even though a 10-year-old  Harli Jordean aka Marble King is a CEO since age 8, there’s no need to feel like a complete failure, the truth is that not everybody –actually nobody, finds their true calling from age 6.

Do you feel bad now that you are passed your teenage years and not a millionaire yet? No need to panic as many of the biggest multimillion companies in the world, were founded by people many years older than little Harli.

The bulk food warehouse Costco was launched by a 40 year-old Jeffrey Brotman. The founder of the largest retailer in the world is a living breathing example that 40 is not an age of halting, but instead, a very productive and creative period in a person’s life.
Apart from Mr. Brotman, who is also a very successful attorney, Rolls-Royce, a multinational public holding company, was founded back in 1904 by Henry Royce and his partner Charles Rolls, when Royce was at the of 43.

And let’s not stop there. When Sam Walton was 44 years old, he founded Walmart, yes Walmart, a company that in 2014 was named #19 of the world’s most valuable brands on Forbes list.

A little over 40 years old? Seriously, stop worrying! If Charles Flint, founder of IBM could launch the company at the age of 61, so can you!

The list is actually larger that presented here. These are only a few examples of how age doesn’t matter and how it is literally never too late.

Gadgets From The 1950s: A Whimsical Line of Products for Every Household