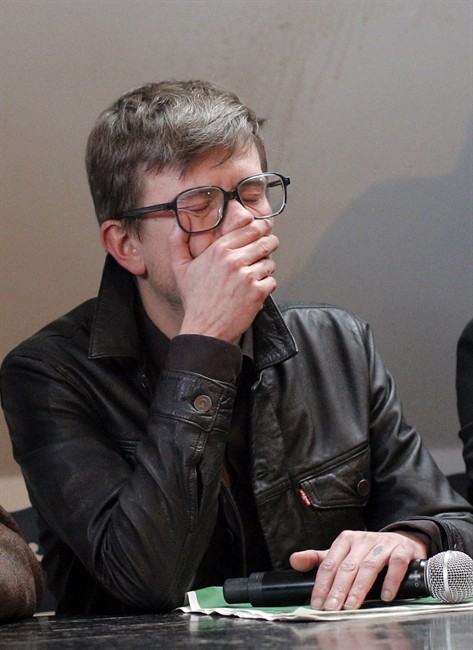 Charlie Hebdo released a new version of its irreverent and often offensive newspaper Tuesday, defiantly putting a caricature of the Prophet Muhammad on the cover that drew immediate criticism and threats of more violence.

The newspaper also skewered other religions, and ran a double-page spread illustratingSunday’s march in Paris that drew more than a million people to condemn terrorism, claiming that the turnout was larger “than for Mass.”

“For the past week, Charlie, an atheist newspaper, has achieved more miracles than all the saints and prophets combined,” it said in the lead editorial. “The one we are most proud of is that you have in your hands the newspaper that we always made.”

Charlie Hebdo planned an unprecedented print run of 3,000,000 copies Wednesday – one week to the day after the assault by two masked gunmen that killed 12 people, including much of its editorial staff and two police officers. It was the beginning of three days of terror that saw 17 people killed before the three Islamic extremist attackers were gunned down by security forces.

Surviving staff members are now using the offices of the Liberation newspaper, which has loaned out space.

The latest cover shows a weeping Muhammad, holding a sign reading “I am Charlie” with the words “All is forgiven” above him. (View the cover below.)

Zineb El Rhazoui, a journalist with the weekly, said the cover meant the journalists are forgiving the extremists for the attack.

Renald Luzier, the cartoonist who drew the cover image under the pen name “Luz” said it represents “just a little guy who’s crying.”

Then he added, unapologetically: “Yes, it is Muhammad.”

Cartoonist Renald Luzier, known as Luz attends a press conference in Paris, France, Tuesday, Jan. 13, 2015. Twelve people died when two masked gunmen assaulted the newspaper’s offices on Jan. 7, including much of the editorial staff and two police. It was the beginning of three days of terror around Paris that saw 17 people killed before the three Islamic extremist attackers were gunned down by security forces. Charlie Hebdo had faced repeated threats for depictions of the prophet, and its editor and his police bodyguard were the first to die. (AP Photo/Christophe Ena)

Speaking at a news conference in Paris on Tuesday at which he repeatedly broke down crying, Luzier described weeping after he drew the picture.

Charlie Hebdo had faced repeated threats and a firebombing for depictions of the prophet, and its editor and his police bodyguard were the first to die. Many Muslims believe all images of the prophet are blasphemous.

Before the new edition was even released, one of Egypt’s top Islamic authorities had warned Charlie Hebdo against publishing more cartoons of the Prophet Muhammad. Dar al-Ifta, which is in charge of issuing religious edicts, called the planned cover an “unjustified provocation” for millions of Muslims who respect and love their prophet and warned the cartoon would likely spark a new wave of hatred.

Indeed, criticism and threats immediately appeared on militant websites, with calls for more strikes against the newspaper and anonymous threats from radicals, according to the SITE Intelligence Group, a U.S.-based terrorism monitor.

The latest issue of Charlie Hebdo maintained the intentionally offensive tone that made the newspaper famous in France. The first two pages included drawings by the slain cartoonists: One showed a much-loved late French nun talking about oral sex; another showed Muslim, Christian and Jewish leaders dividing up the world.

The lead editorial laid out a vigorous defence of secularism, and of the newspaper’s right to lampoon religions and hold their leaders accountable – and ended with a critique of the pope.

But most of the controversy centred on the cover and its depiction of the Prophet Muhammad.

Around the world, news organizations took different approaches to illustrating stories about the Charlie Hebdo cover. In the United States, a CBS program and The New York Post ran images of the cover, while the ABC network didn’t. The New York Times also didn’t publish it, but included a link to it. CNN didn’t show the cover online or on the air. The Associated Press had not run previous Charlie Hebdo cartoons showing Muhammad, and declined to run the latest one as well, based on its policy to avoid images designed to provoke on the basis of religion.

In Europe, Spain’s leading daily newspapers published the image online and the state broadcaster showed it on news bulletins. In Britain, The Times of London, the Guardian and the Independentwent with the image, while The Daily Telegraph didn’t. The BBC showed the new cover on news programs. Germany’s Sueddeutsche Zeitung, Der Spiegel and Frankfurter Allgemeine Zeitung all used it on their websites.

Photo below shows Charlie Hebdo‘s planned cover for Wednesday, Jan. 14, 2015. Below that, Tweets from news organizations show Hebdo‘s staff with the cover, which is to be published a week after the newspaper was attacked for publishing images just like its next front.

‘Less is More’: When Fashion is Minimal.