Tumblr user HomoPower, is today’s hero, as he totally saved a boring day, by making it fun! He also gave a new meaning to the term dick-face, a word that has been being used by many to describe Donald Trump. HomoPower thought of creating a literal dick face for the aspiring politician and we’re astonished by Trump’s resemblance to 500 dicks. 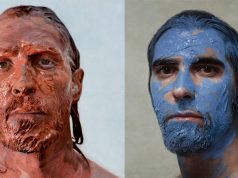 Could Mona Lisa Be The First 3-D Image In History? -Researchers Say Yes