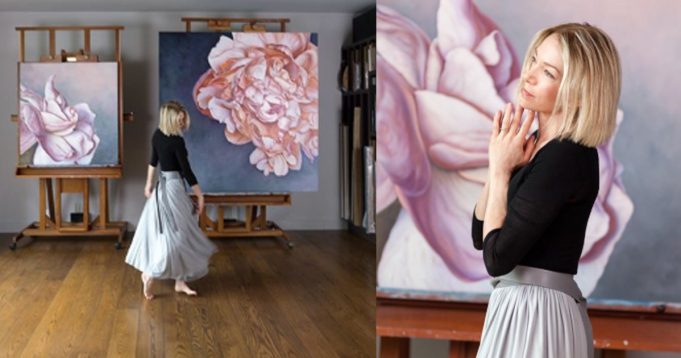 Butterflies & flowers are graphically and dramatically brought to life.

Barcelona-based Carin Gerard is a contemporary classical realism painter. She loves to reduce the color to a monochromatic color palette and tries to make the flowers seem sculptural as if it is coming off the canvas. Her artwork symbolically and harmoniously links large scale paintings of flowers bursting forth with vibrancy from aged grain barrels, butterflies flitting colorfully over satin backdrops, and porcelain dolls that reflect childhood and a sense of loss.

The paintings reveal her attention toward the essence of chiaroscuro – emphasizing clear tonal contrasts of light-dark. Creating “pretty paintings” is never her goal. She strives instead to emphasize the sensual, the powerful and the unexpected of her organic subjects.

“Earth laughs in flowers.” – Ralph Waldo Emerson… and this is why I paint them. 😁

“Every day brings a chance for you to draw in a breath, kick off your shoes, and dance.” – Oprah Winfrey