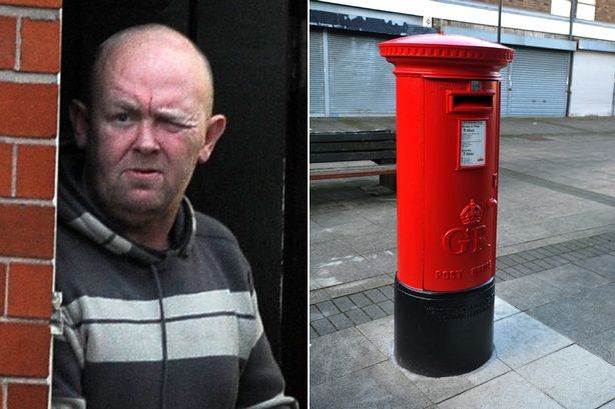 Paul Bennett, 45, approached the box with his trousers down before rubbing himself against it and shouting “wow” at Scholes Precinct in Wigan

A drunk man was caught trying to have sex with a postbox in the middle of a shopping arcade.

Paul Bennett, 45, was spotted walking towards the postbox with his trousers down and making ‘sexual advances towards it’ at Scholes Precinct in Wigan.

He then rubbed himself against the postbox while holding his hands in the air and shouting “wow”.

After completing the act he pulled his trousers up and started swinging on a lamppost.

An alarmed eye-witness called police, who found him exposing himself again when they arrived.

He was arrested and launched into a foul-mouthed tirade as he was led away by officers.

Katie Beattie, prosecuting, said the complainant heard shouting and swearing outside her window and saw the drunken defendant arguing with a woman.

The woman left and Bennett lay down on a bench in the precinct and started to shout, before sitting up and exposing himself by pulling his trousers down.

Miss Beattie said he then began performing a sex act and walked over to the postbox and “started to make sexual advances towards it”.

The court was told the woman then witnessed Bennett rubbing up against the postbox with his trousers down before walking away.

The defendant’s arms were raised described as being in a star position, as he continued to expose himself while shouting “wow”.

Ms Beattie said: “The victim rang the police. She was disgusted by his behaviour.”

Bennett pulled his pants up then swung on a lamppost before looking at a reflection of himself in a window.

He was found by police officers at the front of a shop in the precinct where he was still exposing himself.

The court heard that drunken Bennett became agitated and clenched his teeth as he shouted and swore at the officers.

Defending, Martin Jones said: “The lady watched for some time and was ashamed, disgusted and upset and my client accepts that.

“Clearly there are issues that need to be addressed.”

Bennett was handed a 12-month community order with an alcohol treatment and supervision requirement.

He was also ordered to pay £50 compensation to the victim, £150 court costs and a £60 victim surcharge and told to sign the Sex Offenders’ Register.

Paul Bennett tried to have sex with a postbox