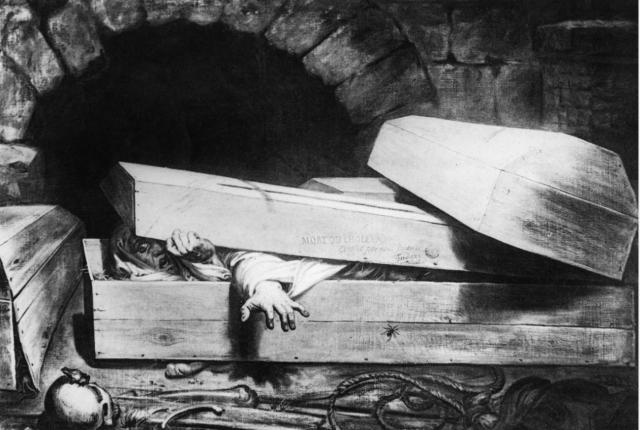 In the days before sophisticated medical equipment could definitely determine when someone had passed from this world to the next, many people feared being buried alive—and enacted strict post-passing procedures to ensure it didn’t happen. In Buried Alive: The Terrifying History of Our Most Primal Fear, Jan Bondeson looked at some of the measures taken to guard against being buried alive, including coffins that featured a bell or flag that would warn passers-by of any movement down below. While many reported cases of burials of the living were exaggerated, Bondeson did unearth a few cases of people who went under the earth while still breathing.

In 1822, a 40-year-old German shoemaker was laid to rest, but there were questions about his death from the start. Although the shoemaker’s family confirmed his passing—he looked dead, they said—no one could detect any stench or rigidity in the cadaver. Still, the funeral went on as planned. But as the gravedigger was dispersing the last shovelsful of dirt onto the grave, he heard a knocking from below.

Reversing his process and now removing the earth as quickly as possible, the gravedigger found the shoemaker moving inside his coffin. His arms were drawn upward, he wasn’t cold, and when an attending physician opened a vein, blood flowed all over the shroud. Over the course of three days, resuscitation attempts were made, but all efforts were fruitless. The shoemaker was declared dead once more and laid to rest for a second and final time.

In 1915, a 30-year-old South Carolinian named Essie Dunbar suffered a fatal attack of epilepsy—or so everyone thought. After declaring her dead, doctors placed Dunbar’s body in a coffin and scheduled her funeral for the next day so that her sister, who lived out of town, would still be able to pay respects. But Dunbar’s sister didn’t travel fast enough; she arrived only to see the last clods of dirt thrown atop the grave. This didn’t sit well with Dunbar’s sister, who wanted to see Essie one last time. She ordered that the body be removed. When the coffin lid was opened, Essie sat up and smiled at all around her. She lived for another 47 years.

In 1867, a 24-year-old French woman named Philomèle Jonetre contracted cholera. Not long after, she was presumed dead. As was custom, a priest arrived to administer the last sacraments, and Jonetre’s body was placed in a coffin. Only 16 hours later, her body was lowered six feet underground.

Like the Shoemaker’s case, a gravedigger heard Jonetre knocking against her coffin lid and promptly removed her from the earth. Though no breath was apparent when a lit candle was placed under her nose, distinct rhythmical sounds could be heard in her chest, and she exhibited some muscle contraction and eyelid twitching. This didn’t last long, however; Jonetre was officially pronounced dead the following day and was buried a second time.

Bondeson calls the case of 19-year-old Frenchman Angelo Hays “probably the most remarkable twentieth-century instance of alleged premature burial.” In 1937, Hays wrecked his motorcycle, with the impact throwing the young man from his machine headfirst into a brick wall. Hays’ face was so disfigured that his parents weren’t allowed to view the body. After locating no pulse, the doctors declared Hays dead, and three days later, he was buried. But because of an investigation helmed by a local insurance company, his body was exhumed two days after the funeral.

Much to those at the forensic institute’s surprise, Hays was still warm. He had been in a deep coma and his body’s diminished need for oxygen had kept him alive. After numerous surgeries and some rehabilitation, Hays recovered completely. In fact, he became a French celebrity: People traveled from afar to speak with him, and in the 1970s he went on tour with a (very souped-up) security coffin he invented featuring thick upholstery, a food locker, toilet, and even a library.