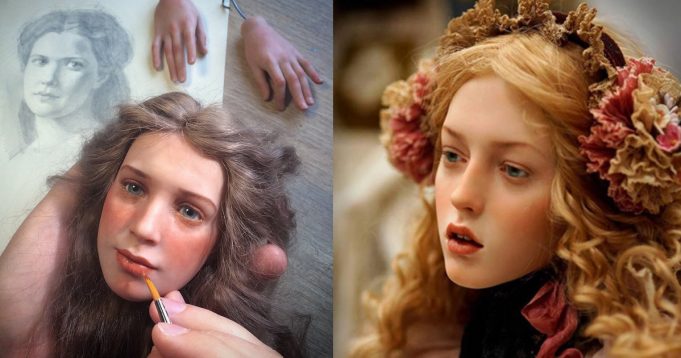 He makes his dolls look so realistic that watching him hold their heads in his hands is actually a little creepy!

Getting a piece of art to look lifelike is a goal for many artists. Michael Zaijkov started creating hyperrealistic figurines in 2010. “The inspiration to create my first doll was the work of Laura Scattolini and Rotraut Schrott,” says the artist.

Zajkov graduated from Kuban State University of Russia in 2009. From 2010 to 2013 he worked at a puppet theater while also attending a graduate school. He was propelled to fame after the 2013 “Art Dolls” expo in Moscow. Zajkov’s creations have multiple joints. He uses polymer clay for the dolls, hand painted glass eyes from Germany, and French mohair for hair.

While Zajkov’s dolls are technically inanimate, his talent at sculpting and painting their faces makes it look like they could start breathing, blinking, and talking at any moment. And just like the artist who alarmed animal lovers with his incredibly lifelike sculptures of fish, Zajkov’s dolls have startled people all over the world. Today, his work has gone on to become a main attraction at doll expos in his native Russia.

To create his dolls, Zajkov carefully sculpts the clay over a foil structure. He includes all the anatomical details, too, like eyes and teeth, and then builds the face around them, just like how our faces are formed over our bones. The process is slow, but as he builds up the layers of clay, an unique face is formed. Because each of his dolls is made by hand, with no two ever alike. The detail he can achieve is incredible. It looks like this face might start moving at any moment!