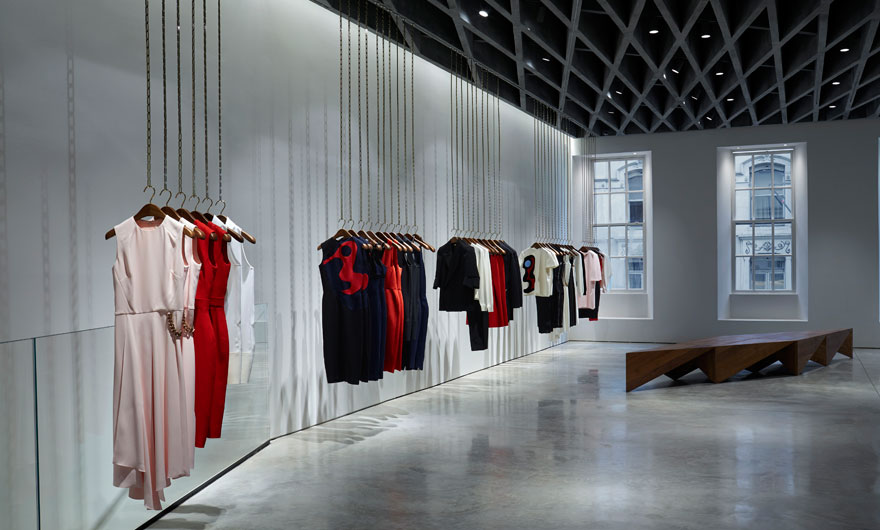 It’s testament to her daring that designer Victoria Beckham chose Farshid Moussavi, ex of Foreign Office Architects, to design her brand’s debut store. While Moussavi has a number of grand projects to her name, she had never designed a standalone store before. But for Beckham that was part of the appeal. The first signal that Moussavi and Beckham were intent on adventure with the 560 sq m space is the floor-to-ceiling glass store front. Flanked by a cast concrete door, which echoes the sash windows of the floor above, it opens directly onto the store with no mannequins or display cases to block the view. Beckham and Moussavi have kept the material palette simple, including concrete and polished stainless steel, used on the ground-floor ceiling to create the impression of height and around the core on the first floor to create an illusion of width.

There are a few accents of colour, which appear in the green glass of the changing rooms; the American walnut that has been wrapped around an existing column, stretched into a bench and then twisted into a wrapping counter, and also used in a series of triangular benches that can cluster or stand alone; and in light gold-coloured metal chains used to hang clothes on the first floor. There is no shortage of drama, as well as play and smart inventiveness. A downstairs clothes rail has a zig-zag pattern, so clothes are automatically spaced evenly. The first floor’s criss-crossing concrete ceiling, clearly visible from outside, is designed to create a sculptural spectacle at night.