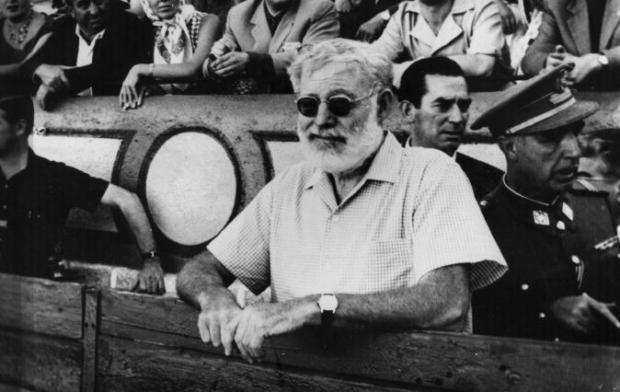 Rather than forgive and forget, these wordsmiths used their poison pens to deliver a healthy dose of literary revenge.

The honeymoon didn’t last long for the notoriously combative Mailer and Lady Jeanne Campbell, his third wife and sparring partner. The pair’s bickering was so fierce that Campbell joked they could clear a room quicker than anyone in New York. The British aristocrat gamely stuck it out for a year before making haste to a divorce court while Mailer symbolically murdered her in An American Dream. In the dark urban fantasy, the main character strangles his wife, throws her out a window, and sodomizes the maid. The misogynistic tale—called “the hate book of all time” by Campbell—helped cement Mailer’s place as public enemy number one on the feminist hit list.

When Martha Gellhorn claimed, “Hell hath no fury like E.H. scorned,” she spoke from experience. Hemingway nursed a long-time grudge against the war correspondent, the only one of his four wives to commit the cardinal sin of walking out on him. A decade later, despite having married again, he took pot shots at Martha in Across the River and into the Trees. “She had more ambition than Napoleon and about the talent of the average High School Valedictorian,” claimed the protagonist. Not only did Hemingway’s fictional alter ego deem his ex-wife conceited, ambitious, and untalented, he wished he could hang her from a tree. The comments were so vitriolic his publisher feared they might incite a libel suit.

Even trailblazing feminist Simone de Beauvoir—who scorned conventional marriage and relished her sexual freedom—wasn’t immune to jealous rivalries. When her longtime love, fellow philosopher Jean-Paul Sartre, began zealously pursuing one of her own bedfellows, young student Olga Kosakiewicz, Simone found herself questioning her long-held beliefs. Ultimately, she reached a shocking conclusion—in print, anyway—by coldly and calculatingly murdering Olga’s doppelganger in her novel She Came to Stay. As if to soften the blow, she ironically dedicated the book to the other woman.

When Lady Byron realized her husband had a fondness for sleeping with men, as well as his half-sister, she made the drastic decision to leave him. After sneaking out of the house with their infant daughter in tow, she drew up a list of Byron’s bizarre behaviors and submitted it to her lawyers, concluding that her hubby was mentally deranged. Far from being contrite, Byron felt he was the wronged party and in his satiric poem Don Juan, he maligned his wife as a “virtuous monster” who “called some druggists and physicians / And tried to prove her loving lord was mad.”

After having her heart broken not once, but twice, by Gustave Flaubert, poet Louise Colet was understandably incensed when she read his racy novel Madame Bovary. The dastardly writer shamelessly infused the story with intimate details taken from her life, including their first sexy tryst in a carriage. Adding insult to injury, the book insinuated that she, like Madame Bovary, used men to advance her social status. The tempestuous Louise had once attacked a journalist who besmirched her reputation, threatening him with a knife, but this time she sharpened her pen instead. In retaliation, she wrote a bestselling semi-autobiographical novel, Lui, which depicted Flaubert as a red-faced buffoon and womanizer.

The Pleasures Of Reading XXXposed, At Mass MoCA