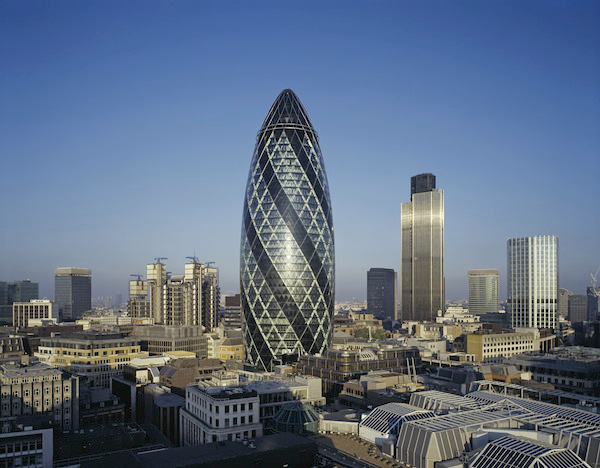 The link between math and architecture goes back to ancient times, when the two disciplines were virtually indistinguishable. Pyramids and temples were some of the earliest examples of mathematical principles at work. Today, math continues to feature prominently in building design. We’re not just talking about mere measurements — though elements like that are integral to architecture. Thanks to modern technology, architects can explore a variety of exciting design options based on complex mathematical languages, allowing them to build groundbreaking forms. Take a look at several structures past the break that were modeled after mathematics. Even if your idea of math is typing juvenile, upside-down messages in a calculator, or asking Siri to figure it out for you, we promise you’ll find something to be wowed by here.

You probably made a Mobius Strip in grade school math class, so you should remember that the geometric form is unique in that there is no orientation. A similar twisty shape is applied to the design of Buddhist buildings. The temple is a mound-like shape known as a stupa — similar to a pagoda — and contains a central spire where Buddhists congregate. One architect wanted to modernize it for a soon-to-be built temple in China, and based the updated design on the Mobius Strip — which also happens to symbolize reincarnation.

The tetrahedron is a convex polyhedron with four triangular faces. Basically, it’s a complex pyramid. You’ve seen the same geometric principle used in RPGs, because the dice is shaped the same. Famed architect Walter Netsch applied the concept to the United States Air Force Academy’s Cadet Chapel in Colorado Springs, Colorado. It’s a striking and classic example of modernist architecture, with its row of 17 spires and massive tetrahedron frame that stretches more than 150 feet into the sky. The early 1960’s church cost a whopping $3.5 million to construct.

Cornwall, England’s Eden Project is home to the world’s largest greenhouse, composed of geodesic domes that are made up of hexagonal and pentagonal cells. The social, environmental, and arts/education center is all about green living and considered that in every aspect of their design and programming. Their interactive education center dubbed “The Core” incorporated Fibonacci numbers (a math sequence that also relates to the branching, flowering, or arrangement of things in nature) and phyllotaxis (the arrangement of leaves) in its design.

A Mathematically-Inclined Cucumber in the Sky

Standing 591-feet tall, with 41 floors is London’s skyscraper known as The Gherkin (yes, like the cucumber). The modern tower was carefully constructed with the help of parametric modeling amongst other math-savvy formulas so the architects could predict how to minimize whirlwinds around its base. The design’s tapered top and bulging center maximize ventilation. The building uses half the energy of other towers the same size. Any mathematician would be pleased to claim credit for the building, but architectural firm Foster and Partners might have something to say about that.

Imagine walking up to the Philips Pavilion at the 1958 World’s Fair and seeing this crazy construction of asymmetric hyperbolic paraboloids and steel tension cables. Mind. Blown. This amazing building appeared at the first Expo after World War II, so it was an important moment that allowed its creators to show off the technological progress the world had made since the devastating battle. Philips Electronics Company wanted to create a unique experience for visitors, so they collaborated with an international group of renown architects, artists, and composers to create the experimental space. ArchDaily wrote about the groundbreaking, temporary building, calling it the “first electronic-spatial environment to combine architecture, film, light and music to a total experience made to functions in time and space. It was through these visually inspired concepts that elevated the Philips Pavilion into a complete experience where one could visualize their special movements through a space of sound, light, and time.” Poeme Electronique was one of the works prominently displayed at the time.

A classical violinist commissioned an eccentric, $24 million dollar home located on the edge of a Toronto ravine. The curved, elegant structure — which also serves as an incredible concert space for 200 people — was named the Integral House. (Calculus geeks, represent!) The home’s owner Jim Stewart was a calculus professor who wrote textbooks and wanted to incorporate the mathematical sign into the home’s name and design. Undulating glass and wood walls also echo the shape of a violin.

Barcelona’s Endesa Pavillion used mathematical algorithms to alter the cubic building’s geometry, based on solar inclination and the structure’s proposed orientation. Algorithms can be used to create the perfect building for any location with the right computer program. For Endesa, the movement of the sun was tracked on site before an architect from the Institute for Advance Architecture of Catalonia stepped in to complete the picture. The algorithm essentially did all the planning for him, calculating the building’s optimal form for that particular location.

Welcome to Cube Village, built by Dutch architect Piet Blom. His tilted, geometric houses — built on top of a pedestrian bridge to mimic an abstract forest — are split into three levels. The top has windows on every facade and feels like a separate structure entirely.

The Sagrada Familia cathedral in Barcelona designed by Antoni Gaudí is a mathematician’s dream. Hyperbolic paraboloid structures are featured throughout. Have you eaten Pringles? Then you definitely know what a Hyperbolic paraboloid structure is. Catenary arches (a geometric curve) abound. The cathedral also contains a Magic Square — an arrangement of numbers that equal the same amount in every column, row, and diagonal. The magic number in Sagrada Familia’s case is 33, which alludes to multiple religious symbols. For example, Jesus performed 33 recorded miracles, and most Christians believe he was crucified at 33 years old in 33 A.D.

A fractal is a fragmented geometric shape that is split into several parts, but each of those components is just a smaller-sized copy of the overall form. Many architects apply this mathematical principle to their building designs, like this Los Angeles gas station that recently had a “green” makeover. Everything has been stripped down — including the filling station’s signs, which are subtle symbols — and the mirrored facade beautifies ninety solar panels that power the station. Recycled materials and a plant-covered roof complete the enviro-friendly revamp.