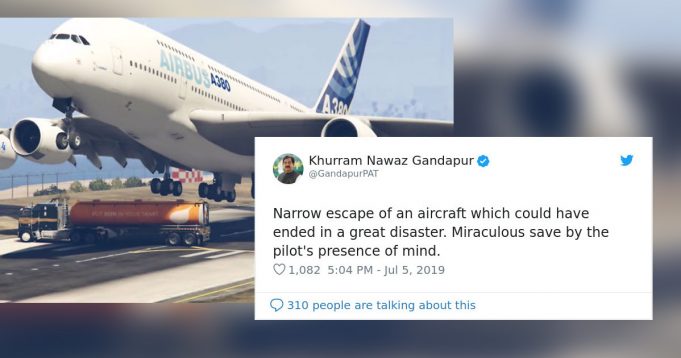 Let’s get some things out of the way. We should respect our elders. We should not make fun of people who are not tech savvy. But how one can repress laughter when reading this?

And to take it further, technology has made leaps and bounds with graphics, and making things that aren’t real, appear like they are. I don’t think a single person alive, has not been fooled at some extent by some ultra realistic video game footage or some deepfake video.

I don’t know how many of us though have made something as extraordinary, embarrassing and hilarious as the man bellow.

Who is the man? His name is Khurram Nawaz Gandapur. He is the Secretary General of Pakistan’s Awami Tehreek Party. What did this man do? He posted footage from the popular GTA V video game, under the impression that the footage was of the real world. Yes indeed! He posted footage of a plane in GTA, impressively taking off, inches away from an oil tanker. He even praised the pilot for his life-saving skills. But Mr.Gandapur wasn’t the only one fooled by the realistic video game footage. Pakistan Zindabad, a twitter page, sided with the secretary-general.  “Mis-coordination between departments working at any airport in the world can lead to a major disaster. In this clip an oil tanker was crossing runway and at same time an aircraft fully loaded with passengers landed. One must appreciate as to how pilot saves the lives of the passengers.”

Do you remember that one time, not long ago actually, when (again) Pakistani politicians neglected to turn off the cat filter in a live event? Maybe Pakistani politicians should stick to the more traditional mediums of media, like television. But then again, we wouldn’t have this hilarious story. Keep it going Pakistan!

Also, check out some of the best twitter reactions to this…incident.