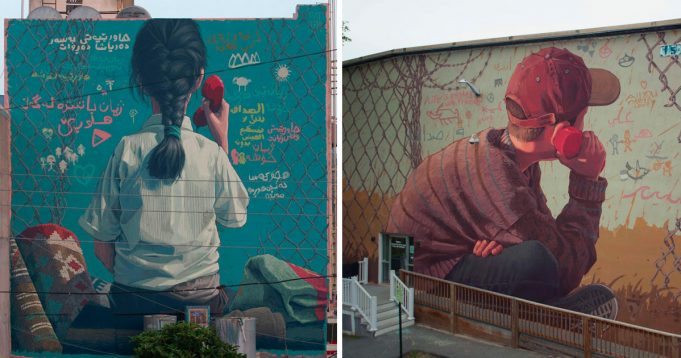 OPENING LINES: Artist Collaborated with Kids in Iraq and New York to Create His Latest Project

Pat Perry is an artist from Michigan who writes and makes pictures through careful and cautious observation. He often works itinerantly, and lives in Detroit. His inspirations include different cultures, landscapes of foreign lands and places or people forgotten by the rest of the world.

Recently he partnered up with the Good Works Foundation and aptArt to create OPENING LINES. He created two murals, one in Biddeford, Maine in New York and the other in Slemani, Iraq. He collaborated with local children for each mural. This projected, connected the two sets of children who are located over 5,600 miles apart. They exchanged video messages and got to know each other via the internet and also their art.

The murals depict a child holding a red telephone. Their backs are turned to the viewer so we cannot know if the child is listening or talking. The child is also surrounded by doodles and messages written in English as well as Arabic by the local classmates of Maine and Slemani, respectively.

“With cultural overlap across the globe unavoidable, the peril of stereotype can be lessened by individual, personal acquaintances across borders;” Samantha Robison of aptART told Colossal “a literal face rather than an idea of one. The most integral part of equality is providing platforms for people to speak, to create, to be listened to.” 20 Mystical Bridges That Will Take You To Another World