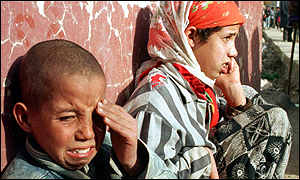 The Algerian government has blamed Islamic extremists for the deaths of more than 100 people, who were killed when two villages were attacked.

The latest violence follows a series of massacres in north-west Algeria since the start of the Muslim holy month of Ramadan.

It is thought the attacks happened shortly after evening prayers.

Homemade bombs were thrown into a cinema in Sidi Ahmed and a mosque in nearby Haouche Sahraoui, in the so-called “triangle of death”, south of the capital Algiers.

Survivors have said that people trying to escape the bombings were shot and attacked with knives, swords and axes.

Since the end of December 1997, more than 800 people have been killed in villages and mountain hamlets.

Last week more than 400 people were reportedly killed in a single attack and thousands of people have been fleeing the area.

Survivors have said that whole families were rounded up and either hacked or burned to death.

There is some speculation that the Armed Islamic Group (GIA), which is accused of the massacres, may have shifted its operations outside urban centres as the result of pressure from the security forces.

One of the GIA’s chiefs has recently been quoted by the media as saying that isolated villages should arm themselves or take refuge in larger, better protected towns.

Very little is known about the GIA except that it espouses extremist interpretations of Islam which it uses to justify the acts of violence.

The Organisation of the Islamic Conference has condemned the massacres, saying that such acts were categorically forbidden by Islam.

The Algerian government has angrily rejected any suggestions that the security forces have been involved in the massacres.

January marks the sixth anniversary of a military coup, the dissolution of the National People’s Assembly and the introduction of a state of emergency.

This led to the cancellation of general elections and the disbanding of the main opposition party, the Islamic Salvation Front, which was certain to win the vote.

A violent insurgency against the coup has claimed the lives of between 60,000 and 80,000 people.

Recent violence has drawn concern from the world community and the US State Department has called for an international inquiry into the massacres.

This has been rejected by the Algerian government who say it would give credence to the idea that Islamist extremists were not the only ones involved.

But a European Union fact-finding mission is expected in Algiers in the next ten days.

The final number of dead was much higher than first reports suggested. Newspaper reports, after gathering statements from survivors, put the figure at 400 – many of them women and children.

Villagers also said that around 30 girls had disappeared after the attacks, as had happened in previous massacres.

The struggle between the military and insurgents has claimed the lives of more than 100,000 people.

In 1999 a referendum approved a law on civil concord, and an amnesty led to many insurgents laying down their arms and being pardoned by the government.

Thousands of militants were freed from prison by President Abdelaziz Bouteflika, who took office in 1999 and was re-elected in a landslide victory in 2004.

A general amnesty is now being considered for Algerians implicated in violence and murder since 1992.

Many Algerians say Mr Bouteflika has brought security to the country, but some human rights campaigners say that abuses and torture by the security forces continue.

Since 1992, 7,000 Islamic prisoners arrested during the violent upheaval are reported to have disappeared.

Photographer Captures Her Daughter and Her Dog in the Same Settings for her Adorable...

Rare Polaroids From The Sets Of Famous Films