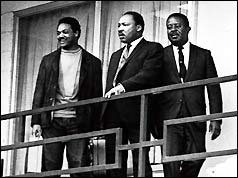 James Earl Ray has been jailed for 99 years by a court in Memphis, Tennessee, after admitting he carried out the murder of the American civil rights leader.

His guilty plea was made on the understanding he was spared the electric chair. It also brought a swift end to the trial, which otherwise might have lasted weeks.

Ray will not be eligible for parole until he is 90.

The verdict is unlikely to silence the speculation that Dr King’s murder was the result of a conspiracy.

Until now, it had been assumed Ray’s defence would be that he was involved in a plot to assassinate the civil rights leader, but did not fire the fatal shot.

Dr King, who preached non-violence, was shot dead by a sniper in the southern city of Memphis in April 1968 as he stood on a hotel balcony. He was in the city to lead a civil rights march.

He had come to Memphis to support striking dustmen, the majority of whom are black. The unresolved dispute meant feelings between black and white were running high in the city.

Immediately after the shooting, the Federal Bureau of Investigation was ordered to begin an investigation.

Ray had escaped from Missouri State Penitentiary in April 1967 where he was serving a 20 year sentence for armed robbery.

He was eventually traced to London in June 1968, where he was travelling under a false identity. He was arrested at Heathrow airport and charged with possessing a loaded firearm and false passport.

Today, Ray appeared in court wearing a dark suit. He spoke only to admit his guilt and in a brief statement he hinted there may have been some kind of plot to murder Dr King.

He showed little sign of emotion as sentence was passed.

Judge Preston Battle pointed out no-one else had so far been connected to the crime, but that was not conclusive evidence there had not been a conspiracy.

He added: “If this defendant was a member of a conspiracy, no member of that conspiracy can ever live in peace or security or rest his head in sweet dreams because in this state there is no statute of limitations for capital offences.”

The trial verdict was seen by some as a cover-up for a politically motivated conspiracy. However, federal authorities insisted there was no evidence of a cover-up.

Ray agreed to plead guilty so he could be spared the electric chair.

Ray was known to have a fanatical hatred of black people. Even while serving his sentence in Missouri, he rejected a move to an open farm prison where conditions were better on the grounds he could not live with black inmates.

Three days after his jailing, Ray recanted his guilty plea. He claimed he had been set up by a gun dealer in Montreal known only as Raoul.

He spent the next 29 years fighting for the trial his guilty plea had forestalled – and won the support of the King family.

New forensic tests in 1997 on the gun said to have been used in the assassination proved inconclusive.

Sonia Delaunay -The Queen Of Abstract Art Is Finally Offered Her Own Retrospective Show...

Transform your Garden With This Transparent Garden Igloo.