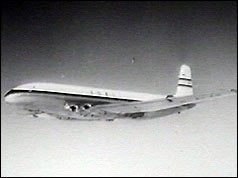 Thirty-five people are missing, feared dead, after a Comet jet airliner crashed into the Mediterranean.

The plane – a British Overseas Airways Corporation jet – was on its way from Singapore to London. It came down in the sea about 20 minutes after taking off from Rome, in Italy, on the last leg of its journey.

Fifteen bodies have been recovered so far. There were 10 children among the passengers. World War II correspondent Chester Wilmot, was also among those missing.

A fisherman reported seeing the plane crash into the sea, south of Elba, after what appeared to be a mid-air explosion.

” I saw a silver thing flash out of the clouds. Smoke came from it. It hit the sea” Giovanni di Marco

This is the third crash involving a Comet since the plane began service on 2 May 1952. The worst accident happened on the first anniversary of the jet’s introduction; all 43 people on board were killed shortly after the plane took off from Calcutta in India.

An inquiry found the accident was caused by an unusually severe storm. The plane suffered a structural failure in the air which caused a fire and led to the crash.

Giovanni di Marco, the fisherman who first reported the latest crash, said: “I heard three explosions, very quickly, one after the other. For a moment all was quiet. Then, several miles away, I saw a silver thing flash out of the clouds. Smoke came from it. It hit the sea.

“There was a great cloud of water. By the time I got there all was still again. There were some bodies in the water. We began to pick them up. There was nothing else we could do.”

The alarm was raised at about 1115 local time. Italian search aircraft were airborne by 1230.

By nightfall, three Italian ships were reported to be at the scene of the disaster, where wreckage with BOAC markings has been found.

Police say none of the bodies recovered so far have been identified. The 10 children on board were on their way home to school in Britain after visiting their parents in the East for the Christmas holidays.

Mr Wilmott was a war correspondent for the BBC in western Europe. He also reported on the Nuremberg trial.

The Comet was the world’s first jet airliner, designed and built in Britain. After a successful first year in operation, manufacturers de Havilland had firm orders for 50 more Comets. Then disaster struck.

The British Overseas Airways Corporation temporarily suspended all Comet jet services following the crash off Rome while checks were carried out.

It was difficult to establish the exact cause of the crash because most of the wreckage was lost under water. But modifications were made and the Comet went back into service.

Then another Comet fell into the sea after leaving Rome on 8 April 1954, killing all on board. Comets were grounded again.

Tests found the plane’s fuselage was unable to withstand the pressures of flying. Cracks appeared in the bodywork which would cause the plane to blow apart during flight.

Comet 4 was launched in 1958 but by this time the Boeing 707 had gone into service – it could carry more passengers and had a greater range than the Comet. The British jet finally went out of production in 1968.

How The Future Of Mankind Depends On These Fruits And Vegetables – by Giorgio...

Museum Gives Visitors The Chance To Interact With The Artworks

‘Redemption Dogs’: Rescued Dogs And Their Families In Series Of Loving Photographs