Aslan Malik is a Berlin artist and art director whose work varies from photography to motion design. A real traveler, he is constantly on the go to cities like Los Angeles and Beijing, working on projects. For a genuine fan of old books and records, his aesthetic could not but be affected by his knowledge and experiences. His work thematic is inspired by the urban neighborhoods of New York while music plays a very important role as his muse. Even though he takes pictures of unkempt places, he finds a beauty in them and really knows how to capture their artistic and strong vibe. Apart from his beautiful photography and advanced designs, the artist is also interested in comics and drawings, focusing on female figures and superheroes.

For his series The Justice League, the artist draws comic book heroes on US dollar bills, making the viewer wonder whether Abraham Lincoln is the real Flash while Alexander Hamilton’s Batman mask clearly makes him look more handsome and badass. As Malik says in his interview for crayonbeats, it all comes from aspects of his childhood memories, back when all the newspapers in his house had doodles drawn on them. Despite what people think of his work, the artist doesn’t see these illustrations as a political or social comment towards the world. He considers the combination of superheroes and dollar bills, pop art, and doesn’t want to make a statement through them, at least for now.

I don’t know about you -nor the artist for that matter- but if it was up to me, I’d move to this refreshing and fun world Malik created, in an instant! 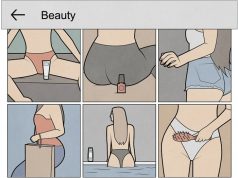