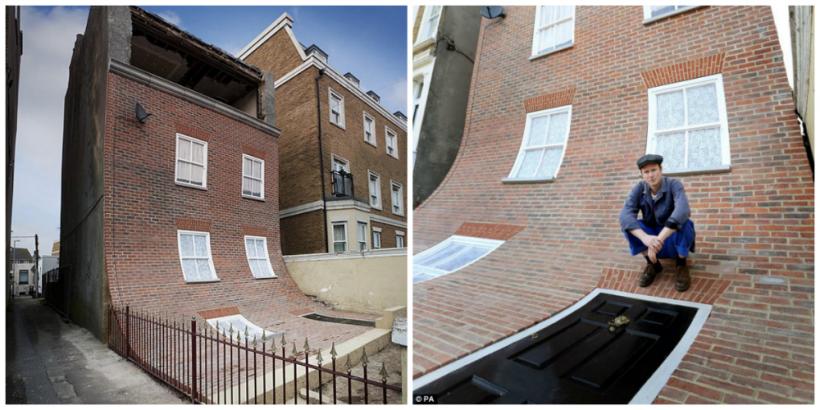 Alex Chinneck is an artist and designer capable of seamlessly combining art, design and architecture in large scale installations that transform the facades of real buildings. Chinneck truly alters the facade, not just focusing on outer aesthetics, but modifying the entire structure to create something completely unexpected and that defies architectural conventionalisms.

His work is as subtle as it is visualy powerful, since he finds an extraordinary balance between transformation and integration. The new and ambitious applications for construction materials strip the elements from their original functional context but at the same time respect the architectural heritage of the neighborhood and surroundings buildings.

One of his installations is From the knees of my nose to the belly of my toes. In this case, Chinneck reconstructed the facade of an abandoned house in the seaside town of margate in kent, UK. The house’s new exterior facade was altered to look like it had literally slipped down onto the ground. The windows, doors and bricks are all curved to seem like the facade just suddenly gave in to gravity.

Another extraordinary example of his urban interventions is Miner on the moon. Here Chinneck completely inverted the façade of a livery stable in Southwark, London. The entire façade is turned upside down and responds to the specific original function of the building. The result is at the same time impressive and subtle, thanks to the architectural elements that use the language and the materials of the architecture found in the district. This way the artwork blends in with the surrounding context without dominating the visual impact of the street.