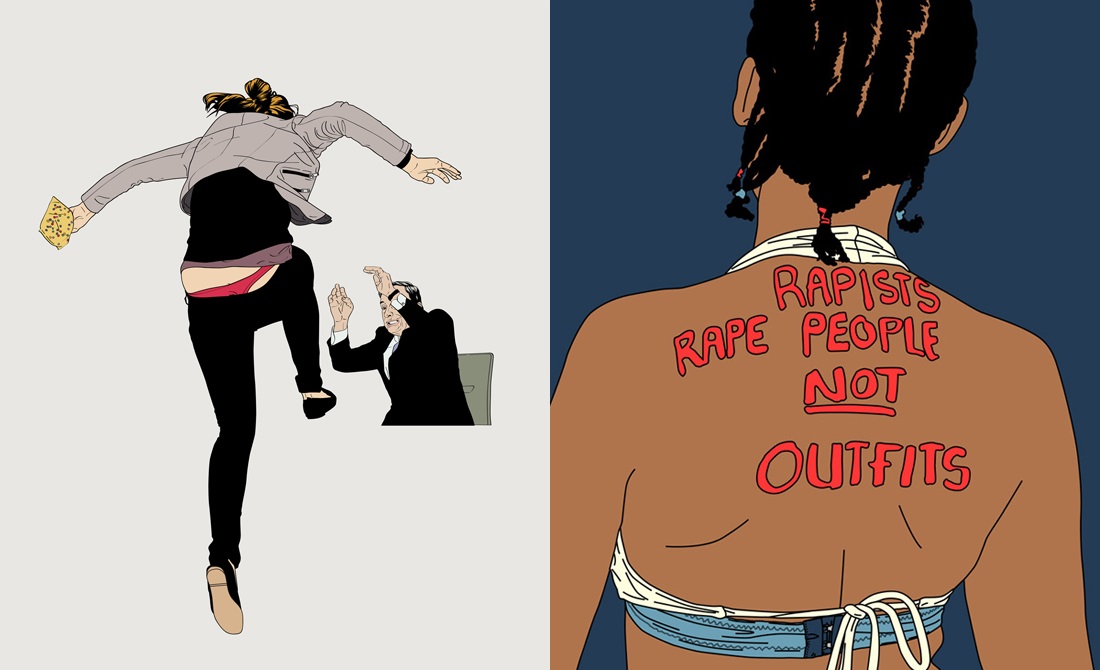 María María Acha-Kutscher is a feminist visual artist and co-director of the experimental art project Antimuseo. Based in Madrid, the artist is known for her work investigating women’s social existence and actions.

In her project Indignadas (Outraged Women), Acha-Kutscher features powerful women who participated in public protests around the world. From Occupy Wall Street (NYC) to the activist work of Femen and Pussy Riot, many women have been captured fighting for their rights and against the injustice of the world. Acha-Kutscher’s beautiful illustrations are inspired by photographs of the press and social media users, and the artist wants to raise these women’s voices even more, by stressing their actions through her work. Putting her subjects and their social work at the center of attention, Acha-Kutscher highlights their social struggles, while her project becomes a reminder for future generations; a reminder that showcase that throughout history, social changes were made by women and men together.

“The drawings show a female body not offered as support for the man’s eyes, but as support for the political message. By transforming photographs into drawings, I set them in the supposed “timelessness” of art. This is another way to connect with society, by using the language of art to immortalize these women’s actions, preserve the memory of the protest, and keep the social movements alive,” she explains about her project.

The FREE THE NIPPLE campaign is an equality movement that uses social media to fight against nudity
censorship laws in America.

Pro-choice protest outside Parliament against moves to restrict access to abortion. July 2011, London

On April 15th, 230 School girls were kidnapped from the Chibok Government Secondary School
by Boko Haram Terrorists in Nigeria. All 230 are still missing..

One of the protesters of DREAM DEFENDERS raises her arms and shout ‘hands up, dont shoot’ outside the James  Lawrence King Federal Justice Building where the U.S. Attorneys Office, Southern District of Florida, is located on August 14, 2014 in Miami, Florida. The protesters say they want justice for Mike Brown, shot and killed by police  in Ferguson, Missouri on August 9. (Image: based on photo of Joe Raedle)

A protester for the 43 missing students. November, 2014, Mexico City.