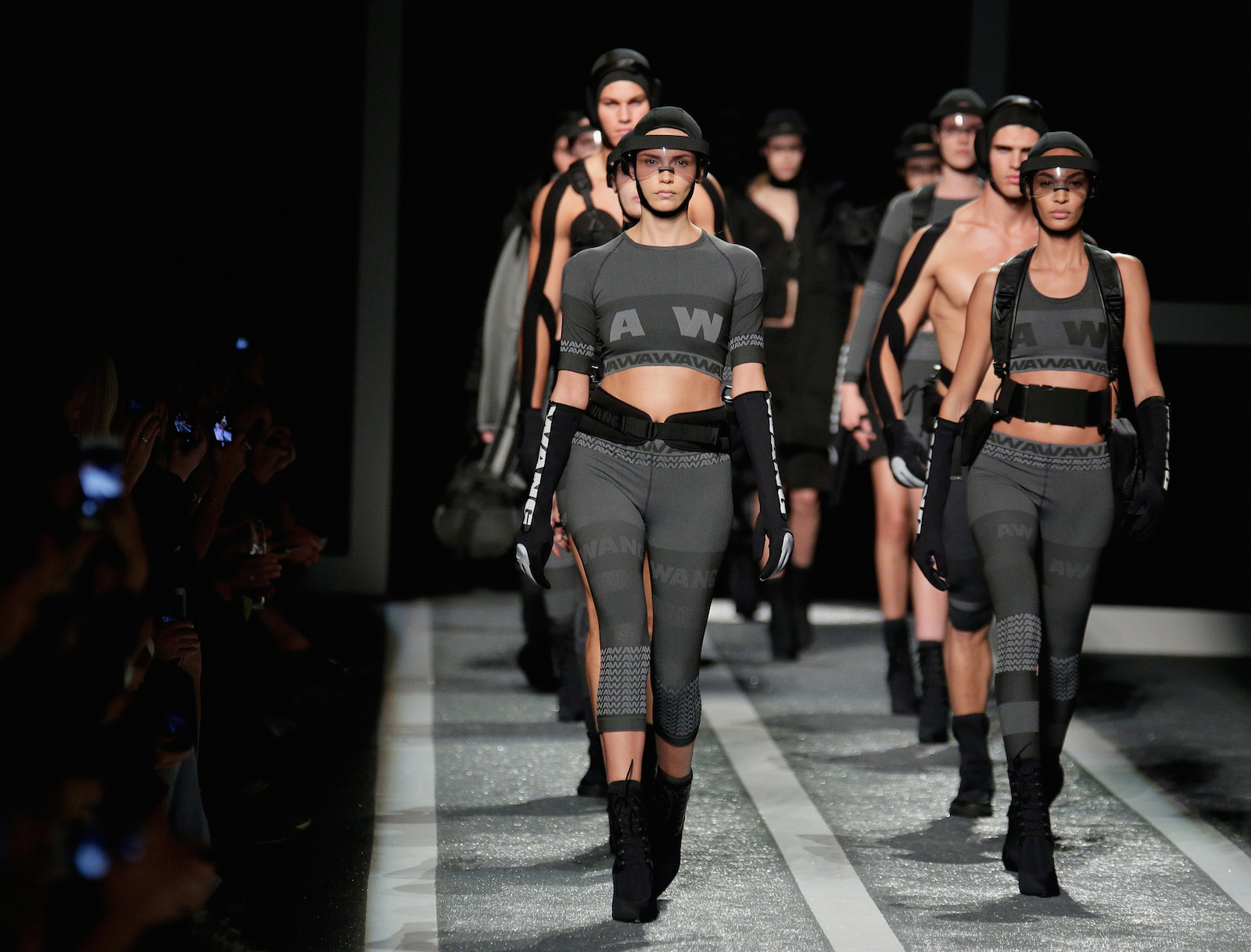 Last night, the Armory on the Hudson in New York City was transformed from an indoor track and field stadium to a fashion arena for the global launch of the long awaited Alexander Wang x H&M collection. Jessica Chastain, Mary J. Blige and Dakota Fanning were among the guests who saw the performance-wear inspired collection presented on the futuristic racetrack runway.

Do note that the collection will be available in 250 H&M stores worldwide, and online starting November 6, 2014.God, we have been waiting for so long for this.

“I love Alexander. I love how he takes street clothes and turns them into fashion. It’s great how H&M’s collaborations make designer fashion on a scale that people can afford,” says Jessica Chastain.

The event was full-on energy from the beginning, with free runners using the show’s set for a parkour performance to kick off the show.  They were celebrated by an audience waving foam boxing gloves and wearing athletic tanks for Team Wang and Team H&M.  The global H&M audience was invited to participate through a live stream hosted on hm.com and alexanderwang.com.

“It reflected the theme of the Alexander Wang x H&M collection. It was like being at the ultimate meeting between fashion and sport, and it was perfect to launch it here in New York,” said Margareta van den Bosch, H&M’s Creative Advisor.

In addition to the crowd of celebrities and fashion industry press, fans of both brands attended. They had won invites to the launch event through a golden ticket initiative via vending machines, held in selected H&M stores around New York.

“Tonight’s event for the launch of Alexander Wang x H&M was about high energy and a full experience that goes beyond fashion; from the attitude and speed of the show, to the pop-up store in a locker-room setting, and the performances by Missy Elliott and Sharaya J at the after party,” said Alexander Wang. “I wanted for everyone to be able to just let go and have fun and hopefully we achieved that tonight.”

Alexander Wang X H&M for women captures the speed of the city, mixing sports and performance for everyday life. Technical details and fabrics are used for both function and fashion, including Wang’s first ever versatile performance wear wardrobe. The women’s collection includes 38 exclusively designed garments, as well as accessories and a playful take on everyday objects. The result is a collection to be worn on the street, in the gym, at the club – the way women live their lives today. Alexander Wang x H&M will be available in 250 stores worldwide on November 6, 2014 as well as online.

Did Interview Magazine Just Take It Too Far With This Kylie Jenner Cover?

Color: the only language where nothing gets lost in translation