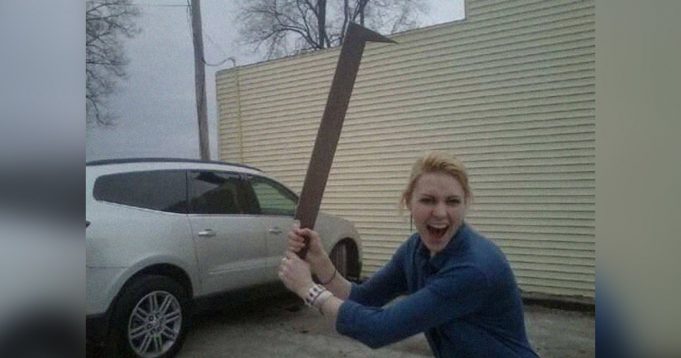 For the uneducated in Tolkien’s Legendarium, Uruk-Hai are a perfected breed of orc-warriors from the Lord of the Rings universe.  The Uruk-Hai (Uruks for short) first appeared in Middle Earth when they conquered Ithilien in Gondor, and destroyed the city of Osgiliath. Later, as seen in the films, they were bred by Saruman, in the pits of Isengard.

In addition with Uruk-Hai being ferocious and merciless, they carry pretty bad-ass swords. It seems that “sohbugg” (Tumbler user) thinks so as well. Well she bought one! She bought a real-sized Uruk-hai scimitar from her an antique store in Iowa.

“I drove to Iowa to visit my friend. I found an Uruk-Hai scimitar in a local antique shop. I bought it. Without hesitation. I don’t know if I have enough for gas to drive home. Worth it”

Well, while I would by the sword as well, the next thing I’d do, is probably hang it on a wall, somewhere in my house. She…she had other plans. She went on a “campaign” to prove what a practical buy, her sword is. So scroll down and check out all the useful things you can do around the house, with your trusted Uruk-hai sword.

And lastly, thank you “sohbugg”, now I can buy that “Glamdring” I always wanted, without guilt…