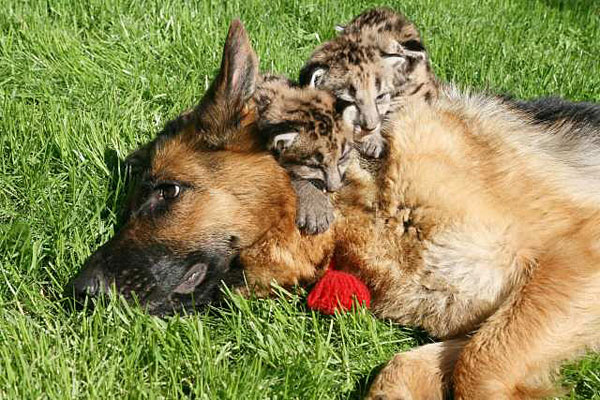 These true stories of inter-species kindness will help brighten your day and remind you that sometimes it’s a dog-save-kangaroo world out there.

A tiger cub born last weekend at Germany’s Stroehen Zoo has already experienced the loss of two mother figures in its short life.  The cub was rejected by its mother shortly after its birth.  Things began looking up when the cub was adopted by Monster, a wirehaired dachshund that belonged to the zoo’s owners.  But Monster himself died unexpectedly.

After Monster’s death, his daughter Bessi (shown here with the cub) took over mothering duties — indeed, a zoo representative said she “fell in love” with the infant and has proved a capable guardian.

Staff at the zoo in Samara, Russia, were excited about the birth of three cougar cubs on July 15 — but they were afraid to leave the cubs with their parents for fear that they could react aggressively and harm the infants.

The cubs were given instead to Cholli, a German shepherd dog with five young puppies of her own and a maternal instinct that just wouldn’t quit. Since then, Cholli and her foster “kids” have gotten along swimmingly, and she’s fed them and cared for them as if they were her own puppies.

We’re always impressed by animals who overlook the differences between species to make sure that youngsters are okay — whether it’s a duck caring for kittens, a dog raising an orphaned monkey or a house cat nursing a litter of bobcats. Oh, animals, we’ll never grow tired of marveling at you!

In just a few months, three baby bobcats found in South Carolina could be a danger to a gray tabby named Zoe. But these days, the fuzzy felines are just members of the family for the nursing mother. The bobcats, orphaned after the abandoned house they were living under in Newberry County was demolished, are being nursed by Zoe at Carolina Wildlife Care near the Saluda River a few miles northwest of downtown Columbia.

Scientists have debated for years whether dogs are capable of love and other supposedly human emotions. Researchers have discovered that these are core emotions controlled from the lower part of the brain, which is common to other animals. And it has been shown that both dogs and humans have rising levels of the hormone oxytocin when they’re engaged happily with each other.

Animal behaviorist Karen Overall even believes that after thousands of years of selective breeding designed to create a close bond between human and dog, dogs’ brains now share a similar neurochemistry with ours. Marc Bekoff, author of Wild Justice: The Moral Lives of Animals, spent thousands of hours observing dogs as well as wolves and coyotes and is convinced they possess both empathy and compassion.

Rex the dog saved a baby kangaroo from the pouch of its mom, who had been struck by a car and killed in Torquay, Victoria, Australia. The joey would have otherwise died, had it not been for the heroic Rex.

A hippo in Africa saved a young wildebeest and a zebra from drowning as they crossed a river. The strong current of the Tanzania river would surely have taken the lives of the wildebeest and zebra had it not been for the quick-thinking and selfless hippo.

A dolphin in New Zealand rescued a pygmy sperm whale and her calf, who were caught on a sandbank. Moko, as the dolphin is called, was known for playing around with swimmers before he earned the title of hero. He managed to communicate with the whales and guide them to safety.

Anjana the chimp fully embraces her motherly instincts. Pictured here with a white tiger, she is fond of taking care of all sorts of baby animals.

Koko the gorilla, famous for her use of sign language and flash cards, is also known for adopting kittens. Here Koko is pictured with Tigger, an orange kitten who quickly became a favorite of Koko’s.

After his mother was killed by a hunter, a 3-month-old macaque monkey was taken in to a Buddhist Temple in Thailand, where he was adopted by the temple dog, Tan. Tan looks after the orphaned monkey and even shares his food.

This dog stepped in after the mother of two red pandas rejected them shortly after they were born in the Taiyuan Zoo in China. The mixed-breed dog cared for the red pandas ardently, helping them grow to their potential.