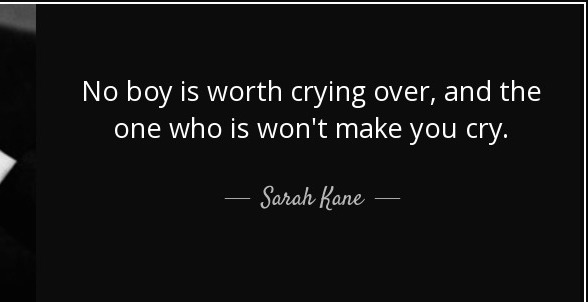 And I want to play hide-and-seek
and give you my clothes
and tell you I like your shoes
and sit on the steps while you take a bath
and massage your neck and kiss your feet and hold your hand
and go for a meal and not mind when you eat my food
and meet you at Rudy’s and talk about the day
and type your letters and carry your boxes
and laugh at your paranoia
and give you tapes you don’t listen to
and watch great films and watch terrible films
and complain about the radio
and take pictures of you when you’re sleeping
and get up to fetch you coffee and bagels and Danish and go to Florent and drink coffee at midnight
and have you steal my cigarettes and never be able to find a match
and tell you about the the programme I saw the night before
and take you to the eye hospital
and not laugh at your jokes
and want you in the morning but let you sleep for a while
and kiss your back and stroke your skin
and tell you how much I love your hair your eyes your lips your neck your breasts your arse your
and sit on the steps smoking till your neighbour comes home
and sit on the steps smoking till you come home
and worry when you’re late
and be amazed when you’re early
and give you sunflowers
and go to your party and dance till I’m black
and be sorry when I’m wrong
and happy when you forgive me
and look at your photos
and wish I’d known you forever
and hear your voice in my ear and feel your skin on my skin
and get scared when you’re angry
and your eye has gone red and the other eye blue
and your hair to the left and your face oriental
and tell you you’re gorgeous and hug you when you’re anxious
and hold you when you hurt
and want you when I smell you
and offend you when I touch you and whimper
when I’m next to you and whimper
when I’m not and dribble on your breast and smother you in the night and get cold
when you take the blanket and hot when you don’t and melt
when you smile and dissolve
when you laugh
and not understand why you think I’m rejecting you when I’m not rejecting you
and wonder how you could think I’d ever reject you
and wonder who you are but accept you anyway
and tell you about the tree angel enchanted forest boy who flew across the ocean because he loved you
and write poems for you and wonder why you don’t believe me
and have a feeling so deep I can’t find words for it
and want to buy you a kitten I’d get jealous of because it would get more attention than me
and keep you in bed when you have to go
and cry like a baby when you finally do
and get rid of the roaches
and buy you presents you don’t want
and take them away again
and ask you to marry me
and you say no again
but keep on asking
because though you think I don’t mean it
I do always have from the first time I asked you
and wander the city thinking it’s empty without you
and want what you want
and think I’m losing myself but know I’m safe with you
and tell you the worst of me
and try to give you the best of me
because you don’t deserve any less
and answer your questions when I’d rather not
and tell you the truth when I really don’t want to
and try to be honest because I know you prefer it
and think it’s all over but hang on in for just ten more minutes before you throw me out of your life
and forget who I am
and try to get closer to you because it’s a beautiful learning to know you
and well worth the effort and speak German to you badly and Hebrew to you worse
and make love with you at three in the morning
and somehow
somehow
somehow
communicate some of the overwhelming
undying
overpowering
unconditional
all-encompassing
heart-enriching
mind-expanding
on-going
never-ending
love
I have for you.

Sarah Kane (3 February 1971 – 20 February 1999) was an English playwright. Her plays deal with themes of redemptive love, sexual desire, pain, torture — both physical and psychological — and death. They are characterised by a poetic intensity, pared-down language, exploration of theatrical form and, in her earlier work, the use of extreme and violent stage action. Kane herself, as well as scholars of her work, such as Graham Saunders, identify some of her inspirations as expressionist theatre and Jacobean tragedy. The critic Aleks Sierz has seen her work as part of what he has termed In-Yer-Face theatre, a form of drama which broke away from the conventions of naturalist theatre. Kane’s published work consists of five plays, one short film, Skin, and two newspaper articles for The Guardian.

Born in Brentwood, Essex, and raised by evangelical parents, Kane was a committed Christian in adolescence. Later, however, she rejected those beliefs. After attending Shenfield High School, she studied drama at Bristol University, graduating in 1992, and went on to take an MA course in playwriting at the University of Birmingham, led by the playwright David Edgar.

Kane struggled with severe depression for many years and was twice voluntarily admitted to the Maudsley Hospital in London. However, she wrote consistently, if slowly, throughout her adult life. For a year she was writer-in-residence for Paines Plough, a theatre company promoting new writing, where she actively encouraged other writers. Before that, she had worked briefly as literary associate for the Bush Theatre, London. Kane died in 1999, when, two days after taking an overdose of prescription drugs, she committed suicide by hanging herself by her shoelaces in a bathroom at London’s King’s College Hospital.

Kane originally wanted to be a poet, but decided that she was unable to convey her thoughts and feelings through poetry. She wrote that she was attracted to the stage because “theatre has no memory, which makes it the most existential of the arts…I keep coming back in the hope that someone in a darkened room somewhere will show me an image that burns itself into my mind.

Though Kane’s work never played to large audiences in the UK and was at first dismissed by many newspaper critics, her plays have been widely performed in Europe and South America. In 2005, the theatre director Dominic Dromgoole wrote that she was “without doubt the most performed new writer on the international circuit”.[23] Fellow-playwright Mark Ravenhill has said her plays “have almost certainly achieved canonical status.”[24] At one point in Germany, there were 17 simultaneous productions of her work. In November 2010, the theatre critic Ben Brantley of the New York Times described the SoHo Rep’s “shattering production” of Kane’s Blasted (which had opened two years previously) as “one of the most important New York premieres of the decade.