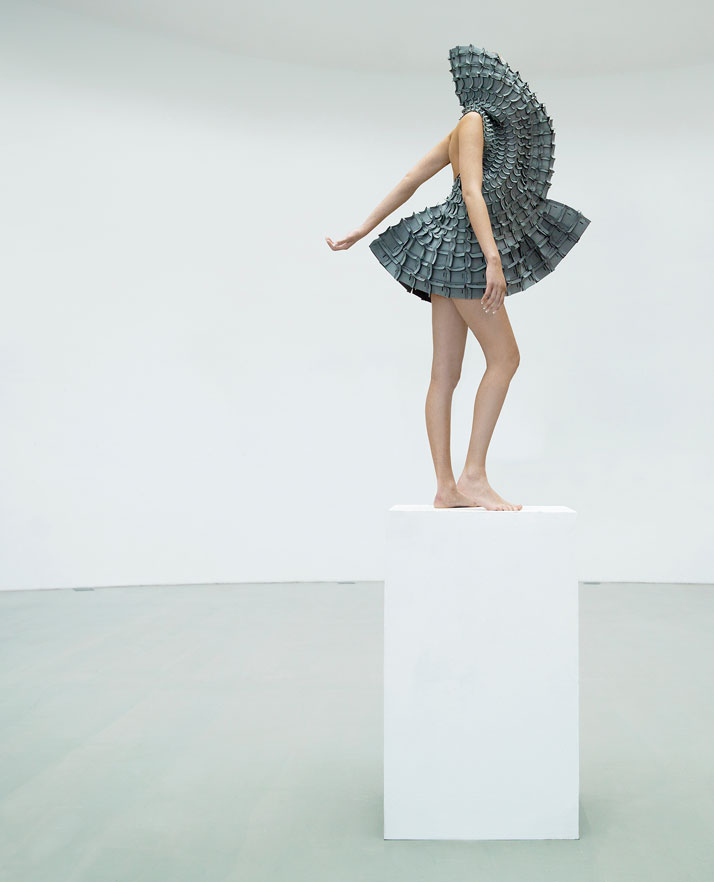 All of your past projects are in one way or another related to architecture. What is it exactly in architecture that you find so interesting as a fashion designer?
A garment is in itself an architectural object, and vice versa – but not because of its appearance, its structure or monumentality, but because of the idea behind it. Both disciplines deal with similar problems, such as the relation between body and space – it’s only the scale that actually changes. As a fashion designer I have been interested in space in my past projects. Since space is a distinctive feature of architecture, it just so happened that my explorations often leaned on the language of architecture, which is why the outcome of my projects is so often reminiscent of architecture.

Another ‘fashion week month’ is about to start, with everyone excited to see what’s new in the fashion world. What is your opinion on ‘high fashion’? Do you aspire to become a very popular ‘high-end’ fashion designer in the future?
High fashion is a form of fashion that emphasizes, above all, a specific fashion idea. These ideas change and are reinterpreted from fashion show to fashion show. I consider that valuable. Fashion design changes just as man does. In the past, these changes came about slowly. Nowadays it’s faster. These changes that are so closely related to fashion, are a reflection of the individual responsible for a collection, and consequently a reflection of society (the local one more than the global one). I like to communicate with other designers in that way. I strive to show my own version of the moment – but I don’t think about whether that will suffice in order to become a high-end fashion designer.

Apart from being an entrepreneur and a good dress-maker, what do you believe is the role (or even, the responsibility) of the contemporary fashion designer in society today?
Even though being a good dress maker and entrepreneur is difficult enough as it is, the contemporary fashion designer should be a loud interpreter of the moment. No matter where their interests lie (be it to explore sustainability in fashion, custom-made clothing or something else), they should be brave in what they’re doing and be free of the anxiety of influence because of their predecessors.

Fashion always happens now, in the moment. Its authenticity arises from the courage of the individual, no matter what direction that may go in.

You mentioned that you have recently spent some time in Sweden working on a ‘‘theoretical approach’’ to fashion design. Can you tell us more about this approach?
I spent a semester in Sweden at the University of Borås where I dealt with the subject of abstracting the body – fashion without clothes. If man is permanently connected to a garment/textile object and is a part of it – what is man without it? That was one of the questions I asked myself and subsequently went about looking for the answers – doing experiments by covering the body with non-clothing/non-textile objects, in turn abstracting it and turning it into the object itself.

You were involved in Lady Gaga’s G.U.Y. video. Can you tell us more about your participation in that project?
Garments from my ‘City Lace’ and ‘Object 12-1’ collections were used in the music video for ‘G.U.Y.’; I consider Lady Gaga a relevant figure in modern design/art, so it has been a great honour to be a small part of that moment.

What do you consider as a ‘successful’ project?
I consider a successful project as one which achieves some sort of communication with the public (and not necessarily a public great in number). The fact that it triggers a reaction is enough for me – to be able to receive feedback (be it good or bad, it doesn’t matter). Another, perhaps, more intimate criterion would be the feeling I get when the project is finished. It is then that I sense the project is a success in itself because it answered the questions it was initially faced with.

Matija Čop’s “Homeless in Heaven” project was one of the winning entries in the Young Balkan Designers competition 2014. His ”Object 12-1” collection will be exhibited at the MAR museum in Ravenna, Italy, next October.

Adorable Dogs In A Photo Booth; This Is What You Get