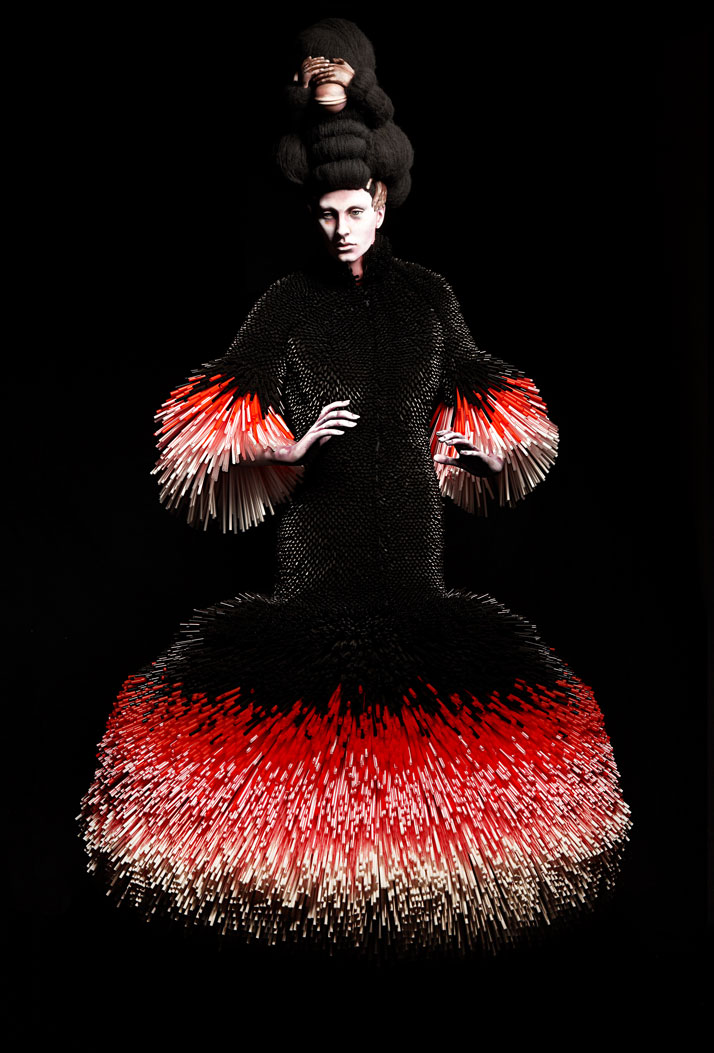 Working on the intersection between fashion design and visual art, Danish fashion designer Nikoline Liv Andersen creates elaborate garments that are not meant to be worn. Instead, they are almost a  stage for experimentation and for telling stories about human nature and our way of life. A graduate of The Danish Design School (2006), Liv Andersen who worked at the studio of John Galliano and Christian Dior in the context of a student internship, creates singular and meticulously crafted pieces of clothing that are also intricate sculptural works of art. The interplay between what is natural and what is artificial is a big part of her work, since she loves experimenting with materials and fabrics, always searching for new ways to transform artificial materials such as straws and nails into something that looks organic. A characteristic example of her work is her collection of Rococo-inspired wigs decorated with monkeys from her previous project, ”The Dance of the Deaf and Dumb Eye” (2011), which will be presented during this year’s Ventura Lambrate as part of the MINDCRAFT14 exhibition of Danish design in Milan. On this occasion, Nikoline Liv Andersen gave us an interview here at Yatzer and talks about her hybrid artistic identity, the difference between art and design and what inspires her.

In what way does your work reflect your own world-view and philosophy about life?
Quite a lot. Through my work I’m always questioning the meaning of life and trying to understand why we are placed on Earth when we are going to die anyway. At the same time though I’m always in my own craft, my clothes-making, searching for a magical moment. The way I see the world is always a huge inspiration for me, but whether other people understand my point of view is less important. I want people to reflect on their own.

Tell us a bit about your most recent project ”Only Angels Have Wings”. What does it consist of?
”Only Angels have Wings” is a story about a city where people have forgotten about the reason of their existence. They have destroyed all nature, and the Earth is coming to its end. But in the city there is a scientist who has built a machine, with which he fabricates artificial nature as a way to legitimise humans’ existence. In my project I try to visualise this artificial nature with clothes and dolls.

Who are the people around you? How do you collaborate in order to materialise your ideas?
My company is as small as it can be; I’m more or less the lone soldier. But I collaborate a lot with my husband, Christian Kornum, who is also a designer. He is my right hand and often an essential part of the process. It’s essential to have someone to discuss your ideas with.

To what extent do you think fashion design can be political?
When I start with a project I always write a little story or a poem. It might be political, for example it could be about a way we live that can have negative consequences for other people in the world. But mainly I write stories such as these in order to inspire me in terms of the project itself.  If people understand this story through looking at my works, that’s great – but I mainly want people to draw their own conclusions.

Can you tell us a bit about your collaboration with Saga Furs? How long have you been working with the brand? Have there been any other collaborations or commissions that have had an impact on you?
My first contact with Saga Furs was in 2006, when they sponsored me for my graduation. Since then, they have sponsored me several times. I have also worked on a freelance basis for them, developing sketchbooks for new ways of using fur. I love making sketchbooks – they are like bibles to me. In fact, only a couple of weeks ago I won the Gold Award at Remix 2014 in the ‘Pimp my Coat’ category, which was again, a collaboration with Saga Furs. Regarding other collaborations I’ve done, Hindsgaul by Retailment has been sponsoring me with its mannequins for several projects. I really love working with these beautiful figures, and the people at Hindsgaul by Retailment don’t seem to mind the fact that I alter their mannequins completely by cutting them, painting them and giving them new joints – actually, they seem to like it!

You dedicate a lot of time and effort in making your elaborate designs. Which is the most complicated garment you’ve ever made?
Everything I do is time-consuming and detailed. I don’t know why I always fall in love with complicated and time-consuming techniques, but I really love sitting there for hours and hours working on things with very delicate details. I have eternal patience when it comes to working with something I believe in… I could never have a job just for the sake of making a living. One of the most complicated garments I ever made was a dress made out of bristly nails. It was really difficult to sew together and you had to be very aware of the order of steps in the process. Another complicated dress was a big black, red and white dress made out of 45,000 straws.

Do you think there is a distinction between art and craft – I mean, between the art we see in museums and the crafts that we find in fashion studios, furniture workshops etc?
There is a huge contrast between art in a museum and design in a store. Design is related to functional matters, while art has to, let’s say, ‘reflect’ in some way. I know that I’m working in between these two worlds: when people ask me if I am an artist or a designer, I tell them that I’m a designer, simply because I’ve been educated as one. But I’m aware that I treat clothing more like an artist than a designer. To be honest, I think that too many people call themselves artists. For me, that’s a rather serious thing to say, it’s a title that you have to live up to.

So, what’s next in your agenda?
Right now I’m working on something for a big Danish event that will be taking place in May. I can’t say anything else about it right now, but you’ll be able to see more about it on my official Facebook page and Instagram as soon as it’s published. My new solo exhibition at Horsens Art Museum, Denmark will also showcase in May.

What do you like the most about what you do? What keeps you going?
As I mentioned before, I’m always searching for a magical moment. It is often a moment in the experimental part of the process where even though I find what I was searching for, I didn’t know how to get there when I started. Once you get started you can’t stop.