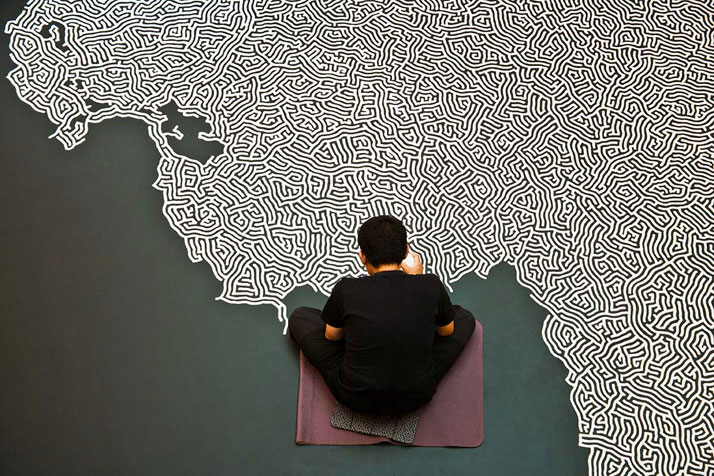 A pioneering contemporary artist, Tokyo-born Motoi Yamamoto carves monumental two dimensional sculptures of entire oceans, shattered planets, typhoons, mountain ranges, fractured staircases and vast plains of brain-like coils using just the one medium: SALT. Although striking, his works are far from being merely aesthetic. Every one of the artist’s saltscapes is an experience in its own right, and one of a highly metaphysical nature for the artist as well as the viewer. Yamamoto’s works have been shown across the world from Russia to the United States and his most recent salt Labyrinth will be on show until 9th Novembe 2014 at the Parisian gallery La (Deuxième) Galerie Particulière.

Regarding his work, the artist has said that: ”Drawing a labyrinth with salt is like following a trace of my memory. Memories seem to change and vanish as time goes by; however, what I seek is to capture a frozen moment that cannot be attained through pictures or writings. What I look for at the end of the act of drawing could be a feeling of touching a precious memory …” For Motoi Yamamoto, his saltscapes act like a frequency that allows him to tune out of everything around him. Almost like a meditation that is actually part of a never-ending healing process following his sister’s death due to severe brain cancer at the tender age of 24, it seems that it is also the artist’s way of never letting go of this ‘memory’ he speaks of.

While he draws his poetic scapes, Yamamoto seems to enter a trance that takes him far into the depths of his consciousness and into a world of peace and tranquility; in fact, while he creates, he appears far removed from reality, no matter how many observers surround him. Each installation is a metaphysical experience, one that hypnotises the viewer, and that puts the world on hold, a restful and peaceful experience where the viewer is completely absorbed in the repetitive ritual of the artist’s hand and awakens only once the final image appears as a whole.

Motoi Yamamoto’s repetitive and very precise ritualistic sweeps of the hand while he traces the patterns on the floor recall the repetition of a monk’s chants during prayer. His works clearly physically recall Tibetan monks’ mandalas, which are colourful sandscapes, also loaded with symbolic importance and intense emotion. Unrushed, the artist seems to trace for the sake of tracing, almost as an obligation in order to remain sane.

The only artist to use salt in this way, Yamamoto’s choice of material isn’t a coincidence. In Japanese culture salt is a highly significant symbol for the source of life as well as being a purifying element and is often used in ceremonies celebrating life and death. Reminding of the temporality of life, regardless of the number of times the artist repeats his saltscapes, the experience remains a transcendental one that is as magnificent as it is temporary.

In fact, after each show, the artist always takes the salt back to its origin, back to water, in a ceremony entitled Return to the Sea, which for him is just as important as creating the work itself. The salt goes back to the sea, just like a body goes back to the earth after death, thereby symbolising the evanescence and transience of life.

Motoi Yamamoto has been applying himself to his brilliant-white salt sculptures since 1994 and has dazzled the world – a world that is in constant motion and upheaval – with his diligence and serenity. Transcending external movement and his own internal turmoil, he continues to pour himself entirely into this perpetual exercise, which so far, has lasted two decades.

12 Elizabethan Collars That Your Pets Will Love To Hate