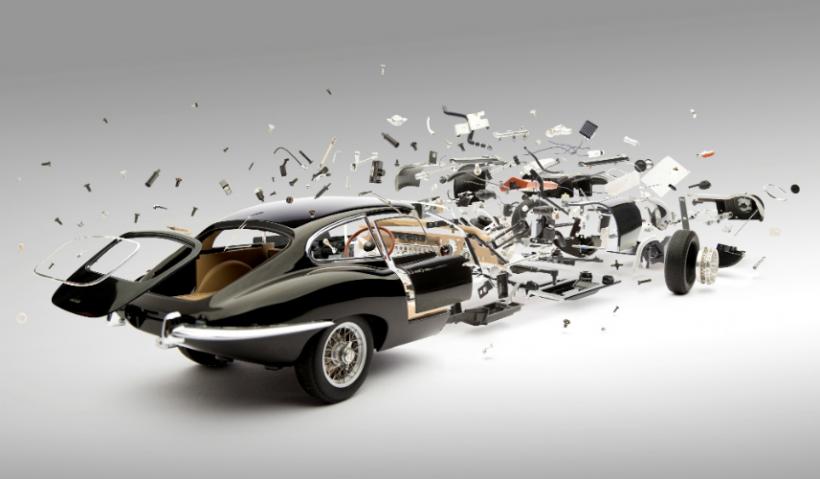 The Swiss artist Fabian Oefner, latest work is the photographic series Disintegrating, made up by three images of exploded views of classic sports cars. Oefner has carefully deconstructed vintage roadster scale-models and painstakingly photographed each component in a very specific position. This meticulous piece by piece construction creates the illusion of an exploding automobile.

Fabian says: “I have always been fascinated by the clean, crisp looks of 3D renderings. So I tried to use that certain type of aesthetic and combine it with the strength of real photography.”

The classic sports cars chosen for the images are Mercedes-Benz 300 SLR Uhlenhaut Coupé with gullwing doors (1954); a black Jaguar E-Type (1961); and a Ferrari 330 P4 (1967). The process to build the photographs begins with a first sketch on paper that establishes where each individual piece should be placed. Then Oefner begins the careful deconstruction of the over thousand components of each model car.

Following the initial sketch, each piece is individually placed with fine needles and pieces of string in its exact position in the composition. After the construction is completed, he then meticulously sets up the camera angle of each shot, adjusting the lighting accordingly.

Lastly, the individual shots are blended together in post-production where each element is copied and pasted into position using the wheels as a fixed reference point. The end result is a single image of the exploding car captured with the precise angle and perfect lighting that completes the illusion of “the ‘slowest high-speed images’ ever captured”, in the words of Oefner.

“It took almost two months to create an image that looks as if it was captured in a fraction of a second. The whole disassembly in itself took more than a day for each car due to the complexity of the models. But that’s a bit of a boy thing. There’s an enjoyment in the analysis, discovering something by taking it.”

All images and video courtesy of MB&F M.A.D. gallery

Olafur Eliasson’s “Riverbed” At The Louisiana Museum Of Modern Art