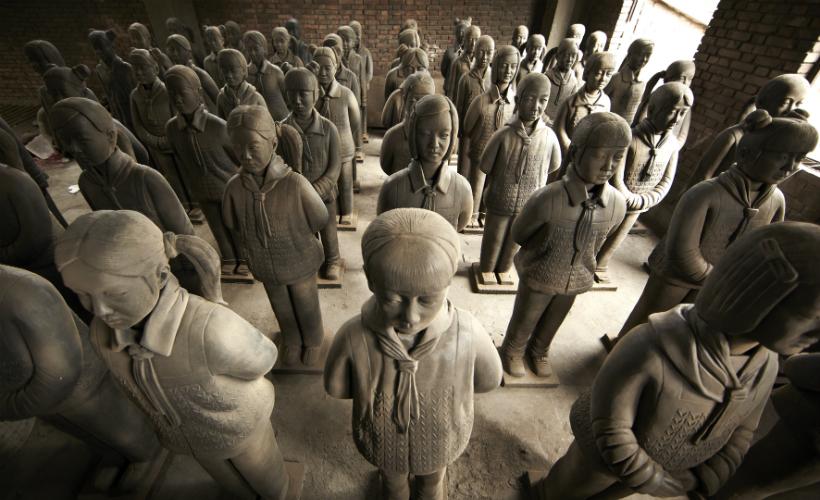 The French artist created an army of schoolgirls to document the gender imbalance in China’s society.

The French artist Prune Nourry draws her inspiration from themes that deal with bioethics and especially with procreation in all its forms. For her latest project, the Terracotta Daughters, she focuses on the issue of gender imbalance in China. The gender discrimination has resulted in a large gap between the male and female population in the country. Nourry decided to document and analyse this situation by representing the millions of girls that were never born, or as she calls them “China’s missing daughters”.

In order to tackle this social issue, Nourry chose to portray it through an instantly recognisable national symbol, theTerracotta Warriors, which she transformed from an army of male warriors to an army of schoolgirls. The Terracotta Daughters were sculpted with the same Chinese clay and with the same techniques used to create the original statues of the warriors over 2,000 years ago.

“The Terracotta Warriors are a very strong, familiar Chinese symbol,” explains Nourry. “To change them in a slight way raises questions: “Why did she change this symbol that we know and nobody normally touches?”. But to confront the myth of the perfect child she needed to use an important cultural symbol to provoke a change, not only in an artistic context but also a change in life.

Nourry prepared for the project by documenting herself through visits to professors at the University of Xian. She then met 8 orphan Chinese girls through the NGO The Children of Madaifu, who became the models for the 8 original sculptures of Terracotta Daughters.

The modelling of the 8 sculptures forced Nourry to abandon her own technique and style to create figures that respected the millenary style of the warriors. A group of Xian craftsmen also intervened, creating 100 unique versions inspired on the 8 girls she sculpted, which completed the army of 108 missing girls.

To further provoke change, Nourry wanted to support the education of the young girls who influenced the project and became the 8 original Terracotta Daughters. The sale of each of the original 8 sculptures will pay for 3 years of schooling for the orphan girl it represents.