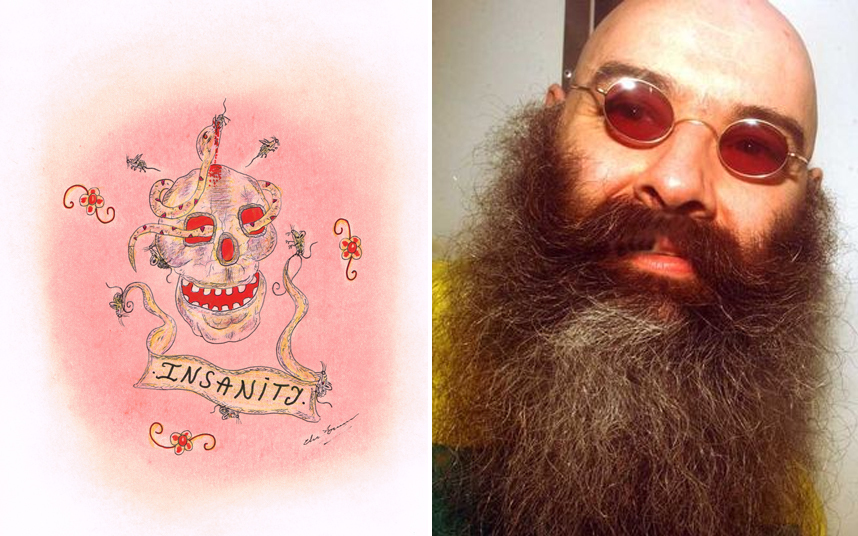 Notorious convict Charles Bronson, one of Britain’s most violent prisoners, has raised thousands of pounds for a holiday for his mother through the sale of some of his works of art.

Paintings called Fantasy Impression, which showed Bronson on a beach, sold for £1,000, while two items, Broadmoor Lunatic Asylum and Self Portrait, each sold for £950 when they went under the hammer at the auction in Towcester, Northamptonshire. Bronson’s painting, Impression of Bedlam sold for £680.

Auctioneer Jonathan Humbert, of JP Humbert Auctioneers, said Bronson asked for eight pieces to be sold after what was reported to be an attack on 12 guards at HMP Woodhill in Milton Keynes. Bronson wanted to make up for upsetting his mother by getting involved in the alleged incident by helping her to get away, according to Humbert.

The artworks belonged to Ronnie Kray and are among 150 lots from the estate of the East End gangster, who died in 1995, that are being sold by his second wife Kate.

Bronson has spent the vast majority of the past 40 years behind bars.

He received his initial conviction for stealing £26.18 in an armed robbery of a Post Office when he was 22 years old.

Since then, his sentence has been consistently extended due to crimes committed while behind bars. These have included battery of prison guards and inmates.

Much of Bronson’s time has been spent in solitary confinement, where he has occupied himself by writing poetry and producing drawings.

Earlier this year, the Category A prisoner changed his name to Charles Salvador as a mark of respect to the late Salvador Dali, one of his favourite artists.

Bronson announced the name change in a hand-written note on his website that also suggested he had renounced violence. “It’s non-violent all the way,” he wrote. “It’s a peaceful journey from here on. The creator will create masterpieces. My heart is at peace and my mind is set on art.”

Titled Bronson: the Death of Britain’s Most Notorious Prisoner, the exhibition in Hackney, London claims it will be the final chance to see the works of the ‘old’ Charles Bronson collected together in one room.