A  bleak and deserted landscape was the reason why Andreas Gursky earned the title of the world’s most expensive photographer in 2011.‘Rhine II’ sold for $4.3 million in a Christie’s auction in New York. The previous record-holder—Cindy Sherman,in 1981 was said to be a more vibrant piece titled: ‘Untitled #96’and sold for $3.89 million in May.

However,  this was not the first piece Gursky made that broke a record.In 2006 his ‘99 Cent II Diptychon’ reached $3.35 million and this proved that plain images can reach the skies and they are proven valuable, too.He was described as one of the most influential photographers of our time.

He was born in 1955 in what used to be East Germany. Both his father and grandfather were masters of the camera and, though he resisted doing the same for years, Gursky eventually followed in their footsteps. He didn’t follow a commercial path however.Gursky saw it as a chance to enter the world of art.

From 1978 to 1981 he studied at the Folkwang University of the Arts, famously home to German photographer and founder of the avant-garde Fotoform group Otto Steinert. He then trained for the next six years in the likes of Bernd and Hilla Becher at the Kunstakademie Düsseldorf. Their  impact on Gursky was huge,because the couple worked together on projects that pushed the boundaries of photography to something on par with conceptual art in which they juxtaposed industrial images with images showing their cultural function. The Becher school includes the likes of Simone Nieweg, Thomas Ruff, Thomas Struth, Laurenz Berges and Candida Höfer, all of whom were inspired by the Becher’s documentary style critique.

He takes panoramic shots that capture a whole scene in one image and calls them  ‘God’s-eye view .We can see this in works like ‘Tour de France’, which takes in a scene of the race in a beautiful mountain-scape, and ‘Hong Kong Island’, which shows a construction site amongst the countless skyscrapers that dominate the skyline.Not only does this technique create unbelievable images but also informs people of the craft and effort that goes into producing them. In order to get a perfect shot Gursky is familiar with using helicopters, cranes and private rooftops. 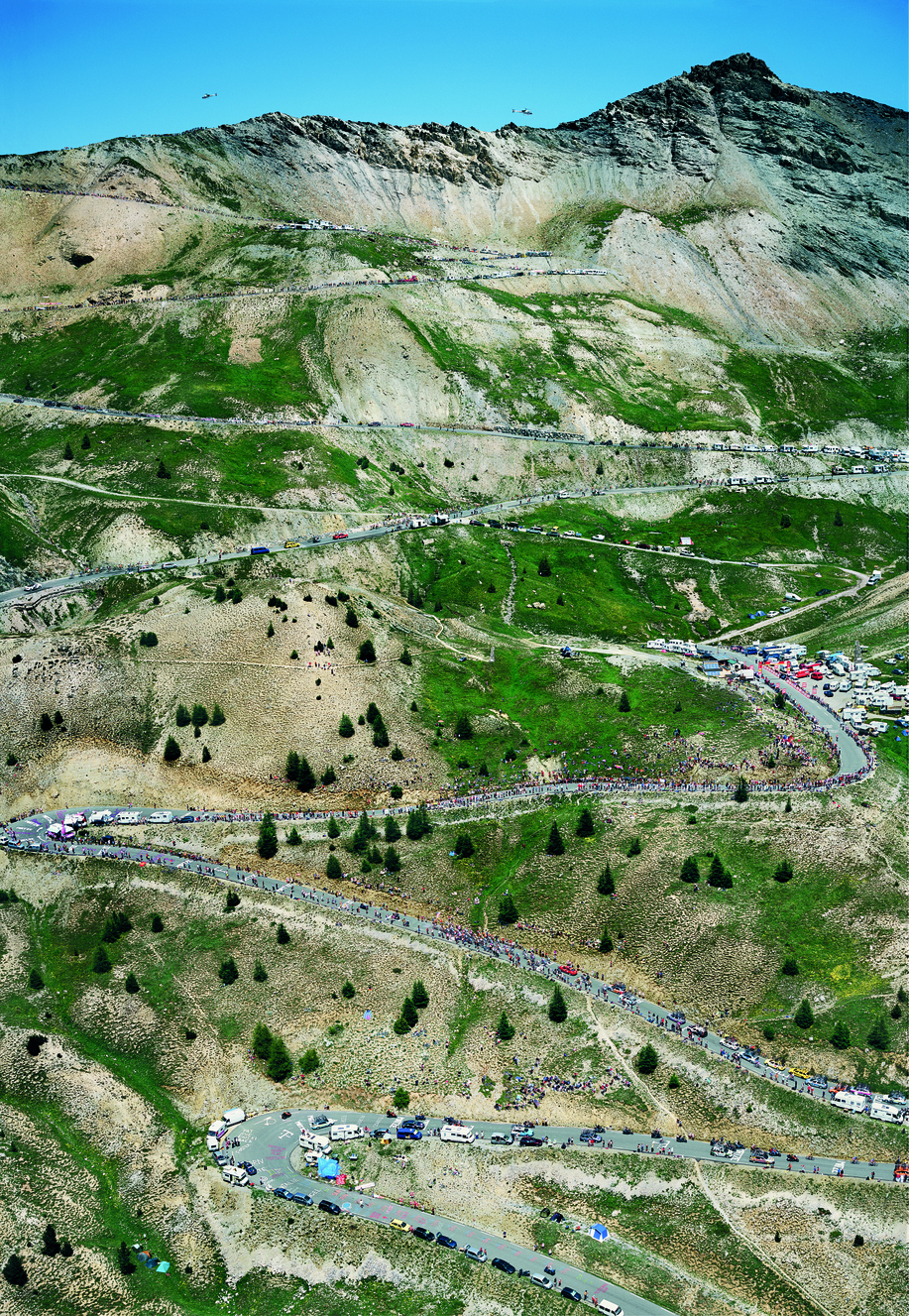 It is such a difficult  process to create his images that he only produces very few every  year. Besides the research and technicalities that precede the work, Gursky uses digital technologies to enhance and manipulate his photographs in post-production. For example, the expanse of ‘Paris, Montparnasse’ is created through the manipulation of multiple images placed alongside each other to give the impression of the block’s immensity. In that case, Gursky uses technology to exaggerate the presence of humans. In ‘Rhine II’ he uses this technology to have the exact opposite result: he removes all traces of people.So, the deserted horizon  becomes something uncomfortably uncanny, the familiarity of the river itself juxtaposed with the haunting absence of the bustling evidence of life normally associated with the scene.

He is a man of mystery, and doesn’t like to talk about his work. He prefers to let the images talk for themselves. Viewing his work for the first time gives people a raw representation of reality.His photos could be the view from windows of city tower blocks or the floor of a factory production line—they don’t look like ‘high’ art.

But what he offers is a mirror a not a window.Through this mirror we can see the way we live from another angle.What is truly obvious from his work is his ambition to capture ‘the encyclopedia of life’. Fascinated  with the human species and our global part, his photographs form a series of anthropological studies. Whether capturing the essence of globalisation via the stacked shelves of ‘99 Cent II Diptychon’ or exploring what life would be in humanity’s absence like in ‘Rhine II’, his work is so amazing because it shows us ourselves from a perspective we have never seen before or may not know we had. This skill is what makes Gursky one of the most influential modern artists . Taking this into consideration, the million-dollar price tag becomes easier to appreciate.

The Metropolitan Museum of Art Releases 400,000 Images Online for Non-Commercial Use

Bored at Home? Here are 31 of the Coolest Projects you can Occupy your...