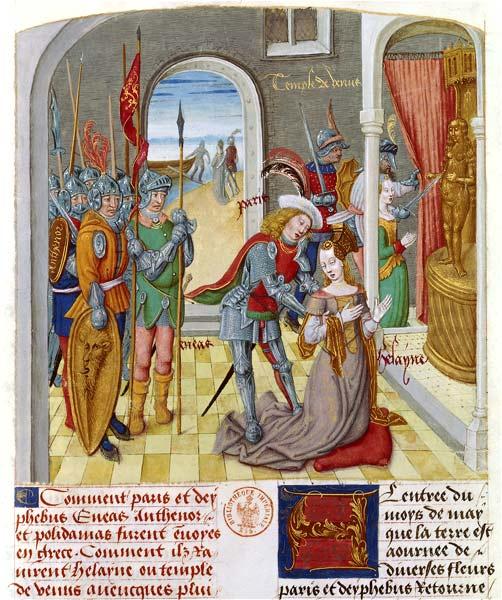 Le Recueil des Histoires de Troye, a 1464 work by Raoul Lefèvre, tells a chivalirized version of the history of the city Troy. The Greek heroes, Hercules and Jason, are recast as ideal knights and founders of the Burgundian dynasty. It was translated by William Caxton into English soon after it was written and found popularity under its new title, The Recuyell of the Histories of Troye. But these days, it is best known for its place in the literary tradition as the first book ever printed in English, and it just sold for over one million dollars.

In the prologue of the English translation, Caxton records how the “work was begun in Bruges in the County of Flanders, the first day of March, the year of the Incarnation of our said Lord God a thousand four hundred sixty and eight, and ended and finished in the holy city of Cologne the 19th day of September, the year of our said Lord God a thousand four hundred sixty and eleven, etc.” It was to be a gift for Duke Charles’s new wife, Margaret, upon her entry into the English court. The original hand-written copy was produced as part of a long tradition of currying royal favor. Sotheby’s, where a first printed edition was up for auction, writes that “It is unlikely that Caxton originally intend his translation for print. He probably first encountered the printing press when he moved to Cologne in 1471 and it was almost certainly at that point that he began to consider undertaking a radically new commercial venture: printing in English.”

The young tradition of the printing press, at the time just 30 years old, favored Latin works over any particular vernacular for their ability to find a market across Europe. Caxton, however, was confident that the cultural cache of the Burgundian court would inspire literate English nobles to embrace The Recuyell of the Histories of Troye.

Although the date of his translation is carefully recorded in the prologue, the context of that first printing is more difficult to determine. Historians have placed it sometime between 1473 and 1475 at a workshop in Bruges.