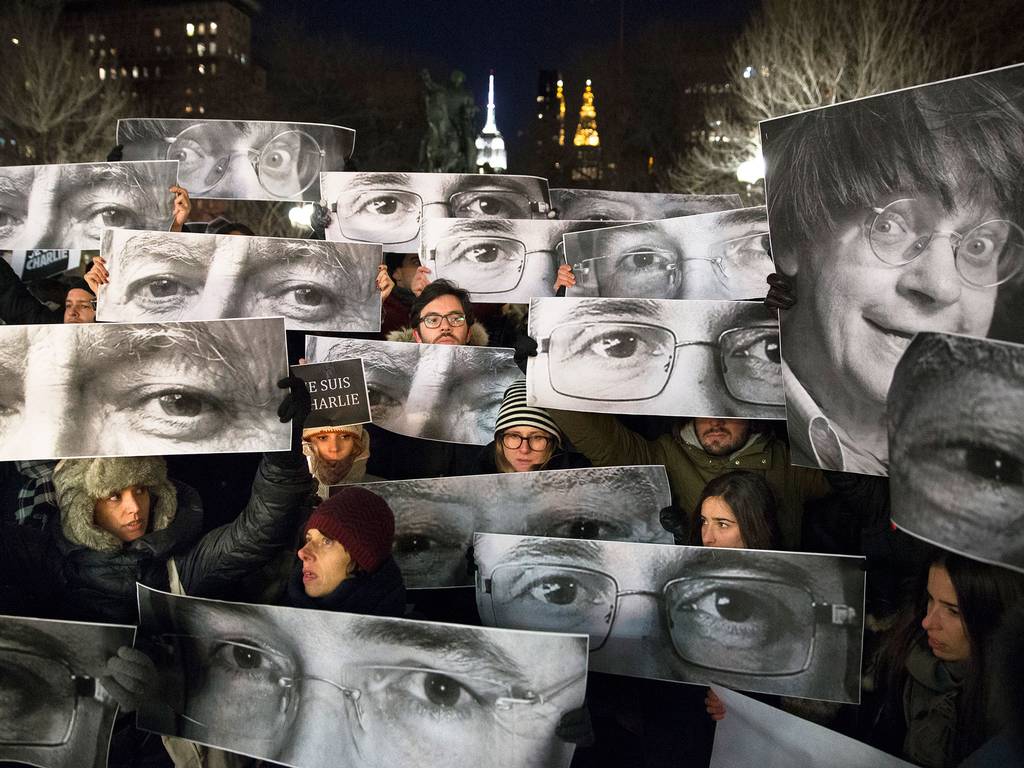 At least 12 people have been killed in a shooting incident at the Paris office of French satirical weekly Charlie Hebdo, police have confirmed.

Witnesses said that at least two gunmen were involved, and that they were seen armed with AK-47s and pump-action shotguns. The attackers themselves are still on the run.Four of France’s best-known satirical cartoonists, including the magazine’s editor, were among the dead. A further 12 people were injured, some gravely, in what is the worst terrorist incident in France for 40 years.

Police said that at least 10 of the killings took place in the initial attack inside the building, or died within minutes because of the seriousness of their injuries.As the gunmen left in a black Citroën hatchback, they met with a police car which was part of the permanent protection given to the magazine after it was firebombed in 2011. The attackers got out of their vehicle and opened fire, killing two officers.

Paris has raised its terror alert to the highest setting in the aftermath of the attack, while a manhunt has begun for those involved. A social media post from France’s AFP news agency reported that the men may also have been armed with at least one rocket-launcher, though this was not corroborated by other reports.France’s interior minister Bernard Cazeneuve said police were looking for “three criminals”, though it was not clear how many took part in the shooting itself. All resources had been mobilised, he said, “to neutralise those who committed this barbaric act”.A Charlie Hebdo cartoonist who survived the attack described how two “hooded and armed men” forced her to enter the code letting them into the magazine’s offices.Video footage posted to social media showed armed gunmen running through the streets of Paris, shooting with automatic weapons and shouting “Allahu Akbar”. According to an eye-witness, one of the gunmen shouted: “The Prophet is avenged.”Below is an edited version of one of the videos.

Corinne “Coco” Rey told the French newspaper L’Humanite that the attack lasted five minutes. She said the assailants “spoke perfect French” and “claimed to be from al-Qaeda”.The French President Francois Hollande has travelled to the scene in Paris’s 11th arrondissement after what he called a “terrorist attack of the most extreme barbarity”.He said it was the latest in a series of terrorist incidents on French soil, and that the nation was in a state of shock.

“This is a difficult moment for France,” Hollande told reporters. “We have prevented several attacks. We knew that we were still under threat because we are a country that cherishes freedom.”The urgent priority for officials on Wednesday afternoon remained tracking down those responsible. Paris police said the gunmen abandoned their car at the northern Porte de Patin and escaped.Mr Cazeneuve said the attack had set in motion protective measures across “all French territories”, including bolstered security at houses of worship, stores, media offices and transportation hubs.

Schools across the French capital closed their doors, while top government officials held a meeting of the national emergency committee. President Hollande has scheduled a national TV address to update the public on the situation later on Wednesday evening.Police confirmed to French media that the dead included the magazine’s editor and chief cartoonist, Stéphane Charbonnier, known as “Charb”, and Jean Cabut, or “Cabu”, a veteran of several French newspapers and reportedly the highest paid cartoonist in the world.According to a journalist at the scene, at least one of the police officers killed had been assigned to protect Mr Charbonnier personally. In 2013 he was included on a “most wanted” list published by Inspire, al-Qaeda’s terrorist propaganda magazine.

Two other cartoonists, Georges Wolinski and Bernard Verlhac, or “Tignous”, were also reported as having been killed.Charb had previously defended a controversial series of cartoons depicting the Prophet Mohammed in 2012, saying: “Muhammad isn’t sacred to me. I don’t blame Muslims for not laughing at our drawings. I live under French law. I don’t live under Koranic law.”Charlie Hebdo’s editor-in-chief Gerard Biard escaped the carnage because he was in London.

He told France Inter: “I don’t understand how people can attack a newspaper with heavy weapons. A newspaper is not a weapon of war.”Mr Biard said he did not believe the attack was linked to the magazine’s latest front page, which featured novelist Michel Houellebecq. The writer’s new novel “Submission”, released in France on Wednesday, has caused controversy after it was described by critics as an “Islamophobic scare story”.Yet the magazine had not received any recent threats of violence, Mr Biard said: “Not to my knowledge, and I don’t think anyone had received them as individuals, because they would have talked about it. There was no particular tension at the moment.”

A bullet’s impact on the window of the offices of the French satirical newspaper Charlie Hebdo in Paris, after armed gunmen stormed the offices leaving at least 10 people dead

A year earlier, the magazine’s offices were firebombed after a spoof issue featured a caricature of Mohammed on its cover. The edition “invited” Mohammed to be its guest editor.According to one report, journalists were discussing a new Islam-themed edition on Wednesday when the gunmen burst in.The latest post made by the Charlie Hebdo Twitter Account was a picture of the Isis militant group leade

One witness to Wednesday’s shooting, Gilles Boulanger, who works in the same building as the Charlie Hebdo offices, likened the scene to a war zone.He told the BBC: “A neighbour called to warn me that there were armed men in the building and that we had to shut all the doors.“And several minutes later there were several shots heard in the building from automatic weapons firing in all directions.“So then we looked out of the window and saw the shooting was on Boulevard Richard-Lenoir, with the police. It was really upsetting. You’d think it was a war zone.”

Another witness, Benoit Bringer, told TV station France Info: “We heard shouting in the street. We saw hooded men carrying Kalashnikovs enter the building. We called the police. After a few minutes we heard heavy firing, a lot of firing. We went upstairs onto the roof.“After about 10 minutes we saw two armed men come out into the street. Three policemen arrived on bikes but had to leave because the men were armed. There was a lot more shouting in the street, a lot more gunshots. The attackers took off in a car.”David Cameron led the British response to the unfolding incident, condemning the attack on Twitter.

“Yoga Joes”: The toy soldiers that take yoga to a whole nother level