From Canada to Qatar, get ready to be inspired by some of the world’s most stunning architecture. These museums, either extravagant modern buildings or mystical medieval ruins or converted train stations, are works of art in themselves and will leave you amazed. 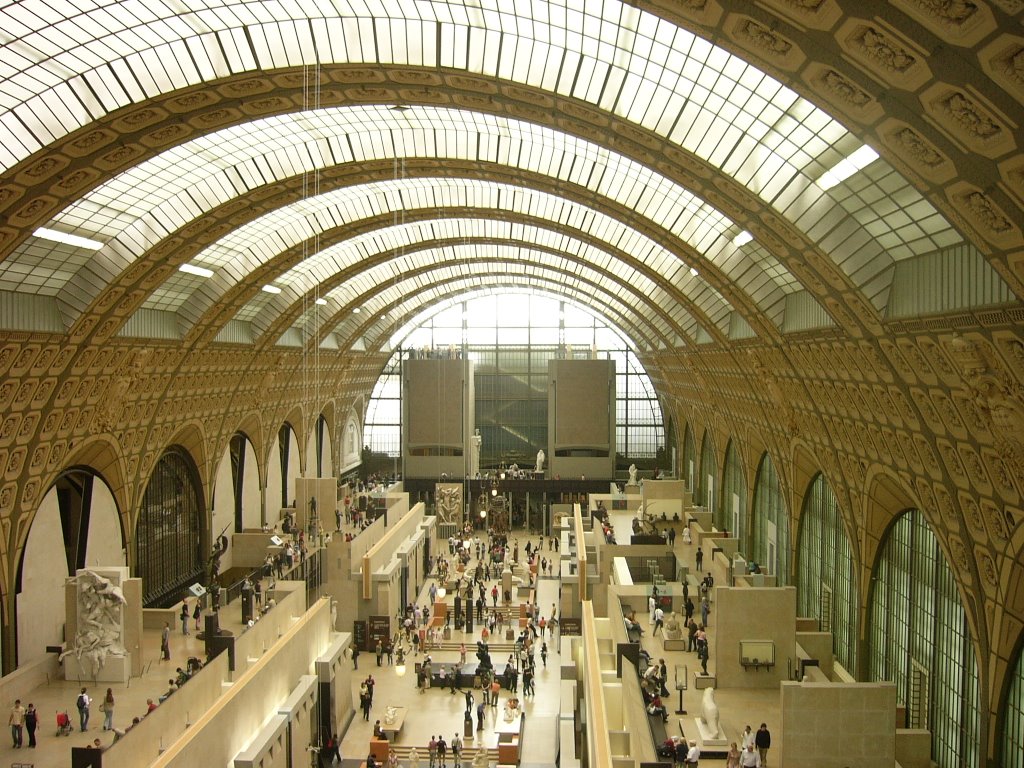 In here, you will find the world’s largest collection of impressionist and post-impressionist respected works of art. A once-upon-a-time railway station, the Musée d’Orsay, originally the Gare d’Orsay, is one of the most excellent examples of the French Beaux-Arts movement with many of its original features preserved -like its beautiful clocks. It would only take a powerful building to equal some of the most masterly Gauguins, Van Goghs and Manets and Musée d’Orsay pulls it off just fine.

Millions of people visit every year the Natural History Museum in London yet many of them miss the admirable building itself. Every room is a joy to visit as paintings and carvings of animals, flora and fauna are all over the ceilings, the walls and even the pillars of the museum. This building undoubtedly deserves as much inspection as the exhibitions that it holds.

The Solomon R. Guggenheim Museum in New York is one of the most recognizable buildings in this metropolis of the world, due to its unique spiral architecture. The museum is one of the signature buildings of the famous architect Frank Lloyd Wright, while some would easily argue that it is definitely his gem, and it took him 16 years to build. The shape of the building allows the extraordinary and profound work that it holds -and which it perfectly matches- to be experienced in a totally different way, by being presented on a continuous path from the top to the bottom of the building.

This Frank Gehry building is globally prized as one of the most outstanding buildings of the late 20th century and combines both a critical and a popular success, something exceptionally rare in the world of architecture. The museum houses a collection of Spanish as well as international artists’ works and reflects the maritime history of Bilbao by suggesting boats and fish scales through its design.

This seemingly gravity-defying building is basically an inverted pyramid and was built to celebrate the millennial anniversary of Hanoi. Few buildings and monuments wider at the top than the bottom have accomplished success on such a remarkable scale (Guggenheim, New York being amongst them). It is claimed by some of the critics that the contents of the museum -over 50,000 objects that trace back the history of Vietnam’s capital city- are no match to its exterior. And what an exterior it is!

In North America, Toronto’s Royal Ontario Museum has long been one of the most popular museums, but in 2007, with the opening of “The Crystal”, it also became one of the most architecturally interesting. Designed by Daniel Libeskind, this ragged deconstructionist building was built as an extension to the original building. It is a spellbinding contrast to its ‘sister’, looking towards the future much like the old building’s heritage looks to the past. Despite the fact that this new wind of the museum has attracted many fans by its bold recklessness, may critics regard it as one of the world’s ugliest structures.

What makes the “Fondation Claude Monet” so alluring is that when entering, the visitor is immediately transported into the painter’s striking and elegant masterpieces. This is a building that greatly benefits from the fact that Monet worked extensively depicting its gardens, which, along with the house, have been preserved to a high standard in order to offer to the visitor a one-of-a-kind insight into the artist’s world -a world of colour, silence and excellent national beauty. Having said that, the most exciting part is being able to actually cross the bridge that is featured in so many of Monet’s paintings , and this is a feeling that cannot be simulated even in the most impressive building.

Built in the 19th century, this is an extraordinary neo-Russian building. Its bright, blood-red colour makes it a perfect piece to sit in the Red Square along with the other vividly coloured buildings of Moscow. Tracking Russian history from prehistoric time to the present, it is estimated that the museum holds a collection of objects totalling in the millions. But the building itself is as appealing historically as the collection it houses. Here is an original baroque building built during the reign of Peter the Great and has moved from Tsarist wealth to Soviet austerity and back again.

This is more a collection of museums and buildings rather than a single museum. What sets Hedmark apart from other regional or provisional museums of its kind is what is sometimes referred to as the “double cathedral”. The building is a beautiful combination of the ruins of medieval cathedral and a glasshouse that encloses the ruins and protects them. This juxtaposition of the modern and the ancient will make your visit a most unique experience.

The Louvre is officially the most visited museum on Earth. A building that was expanded across centuries, the museum is home to some of the most monumental works of art ever made, like Da Vinci’s “Mona Lisa” and “Venus de Milo”. The original medieval fortress foundations are visible from the crypt and its notable glass pyramid was built in 1989, whereas its inverted pyramid was completed in 1993.
The Museum of Islamic Art, Doha

Designed by I.M. Pei, the famed architect also responsible for Louvre’s pyramid, the building of the Museum of Islamic Art is inspired by the Islamic art it contains. It is the first of its type in the Arab States but other museums have joined it since in places like Cairo and Ghazni. But in Doha, one finds one of the most complete collections, an extremely large set of objects that perfectly honours the interesting building they are housed in. The interior also challenges the visitor with Islamic patterns approached from a modern point of view.

Museums that focus on presenting the work of a single artist are burdened with the task of housing the artist’s work in a building that absolutely speaks for them. The Dali Museum is possibly the one that succeeds the most in that effort. Although the main structure has a rather standard cubical shape, it is the glass and steel that seems to pour out of the building like a melted material of some sort -much like the melting clocks in “The Persistence of Memory”- that really gives the museum its Dali character. This surreal addition to Florida’s west coast absolutely lives up to the fame of the master of Surrealism.

Artist Hubert Duprat And His Controversial Series Of Golden Insects