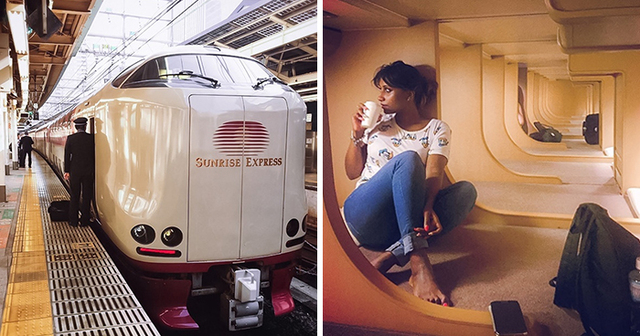 Meet Sunrise Seto and Sunrise Izumo. No, these are not the names of the latest Pokemon video games. But rather the names of Japan’s still operational sleeper trains. They make the trip to Okayama, from Tokyo. Before reaching Okayama, the two trains are actually connected with each other, and after the city in the Chugoku region, they are once again separated, to follow different routes.

These trains were very popular in the 60s and early 70s. Japans economy boomed during that era. An era when many railways were developed. And with the railways, came a lot of express and overnight trains. These trains saw a decrease in popularity with the arrival of the bullet trains.

But not a lot of travelers will argue, that a sleeping train, has a different allure to it.

In Sunrise Seto and Izumo sleeping trains, there are no regular seats. Instead, one will find the “nobi nobi”, a sort of private cabin, that will allow passengers to lay down during their trip. The “nobi nobi” are most of the times free, but you are welcomed to pay roughly $150 additionally, for an actual cabin.

You will also find traditional common use areas and amenities and facilities. Such as vending machines, lounges, toilets and showers. Fan fact about the showers: you use them by buying a limited-supply token, that allows you to take a shower for 6 minutes.

Sleeper trains are now making a comeback in the land of the rising sun. And this time, with trains such as the Twilight Express Mizukaze. Luxury sleeper trains, that offer exclusive lounges, fireplaces and menus designed by Michelin awarded chefs. One of these trips though can set you back up to $10k!