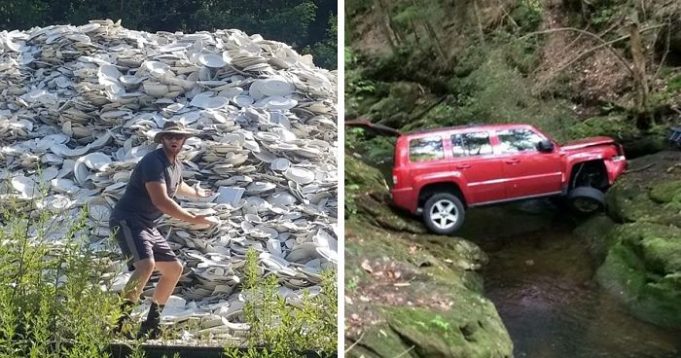 Almost everyone loves the occasional walk in the forest. For the athletic types, for the adventurous types, the romantic types – it seems the forest has something to offer, to everyone. To the curious type of people as well. Those who like to explore, and the like. Forests have a lot to offer to them. Their vastness, the fact that, while they are frequently visited, they are not part of folks’ everyday lives routes. So a lot of things go unnoticed, or hidden in the woods.

Here is a list, of those things. Things that people stumbled upon, in a forest, and they were deemed so cool, strange or curious that they just had to share with the rest of us. We are glad they did.

Enjoy. Tell us which is your favorite. And share with us, your forest finds, stories or photos. Cheers.

I Found This In My Local Woods

There is a 2400 year old giant “honey mushroom” in Oregon, covering 2200 acres, slowly killing off the trees in the forest. It is the largest living organism on the planet.

Found This In The Woods Today

In the Battle of Hurtgen Forest during WW2, the forest was so dense and dark and hard to navigate that the German and Allied medics shared an aid station in the only building either could easily find.

Standing In A Huge Pond That Sinks Every Dry Season

The Redwood Forest in northern California is famous for its towering redwood trees which can grow more than 350 feet tall. This is the height on an average skyscraper. Some redwood trees are so big that miniature forests grow on their upper branches.

Found This In The Woods While Trail Riding

A man called Jadav Payeng single-handedly planted a forest bigger than Central Park to save Majuli Island in Northern India from erosion. The forest is now home to large amounts of stray wildlife.

Found Old Dog Tags In A Metal Pile In Our Woods. Reunited Them With His Wife, Who Lost Her Husband Of 60 Years In 2010

Stairs To Nowhere In New Hampshire

Found This Mushroom While Hiking In The Woods, There’s Gotta Be A Rabbit Hole Nearby

This Moss Covered Boot Found In The Woods

This Stick I Found Looks Like A Burning Torch, Flame Included!

I Found A Memorial For A Fallen Tree While Hiking

Moved To Wisconsin. Found This In The Woods

Abandoned Train Tunnel We Found In The Woods

What My Parents Found On Their Hike

Found This Bottle With Moss While Walking In The Woods

I Was Out Fossil Hunting In A Wash After A Thunderstorm. I Figured It Had To Uncover A Bit Of Stuff Down In The Streambed. I Found This

Came Across An Overgrown Cemetery In The Woods

Found This Fireplace In The Woods While Adventuring

Hiking Through The Woods On A Hot Day, Came Across This Oasis

My Brother Found This (Missile?) In The Woods In Tennessee

Found This Phone Booth In The Middle Of The Woods

I Found A Dead Robot In The Woods Behind My House

My Dog Found A Large Pile Of Carrots In The Woods

Found This Bicycle In The Woods. Someone Had Big Plans?

Found 43 Bucks In A Pair Of Jeans In The Woods

Friend Found This While Hiking The Connecticut Wilderness

Popping The Question With A Swirling Ring