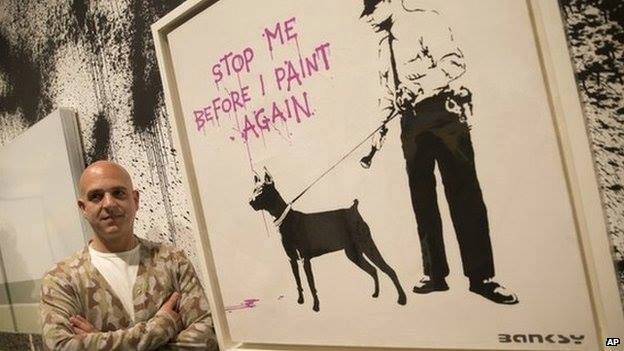 Steve Lazarides, the former agent of the notorious Bristol street artist Banksy of to auction off a collection his private collection of 30 Banksy prints and two sculptures. The auction is to be auctioned as part of Founded 1793, the contemporary art auction at Bonhams New Bond Street taking place on 28 January 2015.

amongst the iconic works to go under the hammer are Flower Thrower (2003), a signed copy of which was recently handed to a helpful schoolboy on a train and was told would be worth about £20,000 after the schoolboy helped a stranger pick up his paints after they fell from his bag. It is alledged that the anonymous passenger was the artist himself.

The auction house, which first sold a work by Banksy in 2003, pioneered the market for the artist’s work at auction. The artist’s work is collected by celebrities such as Brad Pitt and Angelina Jolie, Jack Nicholson, Gwen Stefani, Robbie Williams, Damien Hirst, Sir Alex Ferguson and Bono. Banksy’s work was also prominent in the highly acclaimed exhibition of street culture, Art in the Streets, at Museum of Contemporary Art, (MoCA) in San Francisco in 2011.

Like the famous street artist, Lazarides grew up in Bristol. While working on a photoshoot for Sleazenation, a monthly fashion and lifestyle magazine, that Lazarides first met the artist. The two became friends, and Lazarides soon began selling Banksy’s work – initially, ‘out of the boot of my car in a pub car-park.’ Lazarides recalls the irreverence of this period fondly: ‘In the early years I spent my days driving my clapped-out old Escort MK 2 delivering the little Banksy books to shops all over London, and stuffing handfuls of stickers into print tubes. Those early days were chaotic and fearless.’

This auction, Lazarides states, offers ‘a wormhole back to 2003.’ In fact it was not long before the explosion of interest in urban art and in Banksy particularly gained leverage; and prints by Banksy soon commanded very significant prices in the art market. 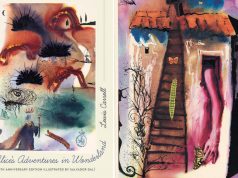 Illustrator “Unmasks” the True Identities of Pop Culture Characters in A Series of Brilliant...