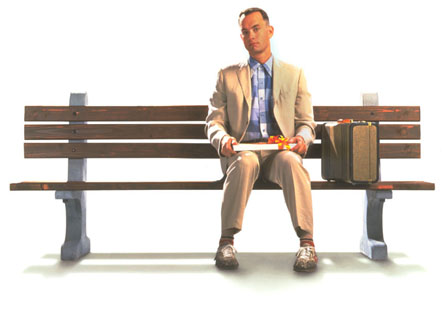 6/6 marks the 20th Anniversary of the classic film Forrest Gump. Back in 1994 we were introduced to the lovable Forrest and brought us one of the most famous quotes of all time: “Life is like a box of chocolates, you never know what you’re going to get.” To celebrate the anniversary, Lazy Sunday is going to list a few things you may not have known about the film.

The scene where Forrest gets up and talks at the Vietnam rally in Washington, the microphone is pulled and you cannot hear him. What he says is: “Sometimes when people go to Vietnam, they go home to their mommas without any legs. Sometimes they don’t go home at all. That’s a bad thing. That’s all I have to say about that.”

Every age transition Forrest has throughout the film, one thing remains the same. In the first scene of each transition he wears a blue plaid shirt.

When Forrest first learns to play ping-pong, he is told the trick is to “keep his eye on the ball” by another soldier. After that moment, whenever he is shown playing ping-pong, he never blinks.

Jim Hanks, younger brother of Tom, doubled for him in many of his running sequences.

“My name is Forrest Gump. People call me Forrest Gump”, this line was improvised by Tom Hanks while filming the scene. Director Robert Zemeckis liked it so much that he decided to keep it in.

Tom Hanks was not paid for the film. He took percentage points which ultimately netted him in the region of $40 million.

Forrest and Dan’s Shrimp Emporium “Bubba Gump”, is now a themed restaurant in thirty-three locations around the world in Japan, Chine, Mexico, Malaysia, Philippines, Bali and of course the United States.

7a. The Bubba Gump Shrimp Company doesn’t have Dr. Pepper on the menu. Which is strange considering it was Forrest’s favorite drink. (Fun Fact courtesy of Toke_420)

The actor who plays the reporter on the scene when Forrest visits Washington DC after his tour in Vietnam was himself, an actual tourist from Atlanta, Georgia. He happened to be on Capitol Hill that day with his wife and was asked to read.

9. All In The Family

The girl in the school bus with the red hair is Tom Hanks’s daughter Elizabeth Hanks.

The park bench that Tom Hanks sat on for much of the movie was located in historic Savannah, Georgia at Chippewa Square. The fibreglass bench he sat on, since then has been removed and placed into a museum to avoid being destroyed by bad weather or possibly stolen. To this day the bench is held in the Savannah History Museum.

During the ping-pong matches, there was no ball; it was entirely CGI, animated to meet the actors’ paddles.

Before Tom Hanks was offered the role, Billy Murray, Chevy Chase and John Travolta turned down the role of Forrest Gump. Travolta later admitting it was a mistake.

Forrest Gump’s Medal of Honor ceremony uses the footage of the actual ceremony for Sammy L. Davis, who was awarded the Medal of Honor on November 19th 1968 by President Lyndon Johnson for his actions in Vietnam a year earlier. Tom Hanks head was superimposed on Davis’ body.

14. Story Behind The Running Scene

This scene was inspired by an actual event. In 1982, Louis Michael Figueroa, aged 16, ran from New Jersey to San Francisco for the American Cancer Society, unknowingly inspiring the line “I just put one foot in front of the other,” it goes. “When I get tired I sleep. When I get hungry I eat. When I have to go to the bathroom, I go.”

The shrimp boat used in the film now resides in the moat surrounding the Planet Hollywood restaurant in Downtown Disney, at the Disneyland Resort in Florida. Also, one of the ping-pong paddles used in the film is signed by Tom Hanks and hung up in the restaurant.

16. Protect Us In Combat

The necklace worn by Lt. Dan is a rosary with a Saint Christopher medal, inscribed “Protect Us In Combat”. It was worn in Vietnam by Gary Sinise’s brother-in-law, Jack Treese in 1967-68.

17. Thank You, Thank You Very Much

The voice of Elvis Presley in the film was done by Kurt Russell.

For the role of Bubba, David Alan Grier, Ice Cube and Dave Chappelle all turned it down. Chappelle thought the movie would bomb, and has admitted that he deeply regrets not taking the role.

Despite earning over $350 million at the box office, Paramount claimed that they were still $62 million out of profit due to costs of promotion, distribution and interest.

Gary Sinise co-founded a rock and roll cover band during the mid-2000s called “The Lt. Dan Band” named after his character in the film. The band often goes on USO tours to play for US military personnel stationed around the world, and also plays various benefits for veteran-related causes.

On the day that Tom Hanks shot the football running scenes he had been suffering from influenza.

When Gump calls to report the Watergate burglary, the security guard answering the phone says, “Security, Frank Wills.” He was the actual guard on duty during that night, and he was the person who discovered the break-in, on Saturday, June 17th, 1972.

The condition that Jenny was being treated for at the end of the movies was probably HIV. She says in the movie that the doctors do not know what the virus is and that they can do nothing about it. She mentions that she is being treated in Atlanta; the Centers of Disease Control in Atlanta did some of the first US research on the epidemiology and treatment of HIV/AIDS; and the time that she died was the time the virus was first being discovered. Based on what we see on her life, she is in several of the categories that were high risk for contracting HIV, including IV drug users and women who have unprotected sex with many partners.

24. Long Day At The Nightclub

Robin Wright was sick with a cold while shooting the nightclub scene. In spite of this, she was still able to perform her own singing during a non-stop twenty-four hour shoot in which she was nearly nude except for her guitar.

Following the success of the movie, Winston Groom wrote a sequel novel, ‘Gump & Co.’ Which is referenced in the movie. Forrest meets Tom Hanks in the novel.

12 Elizabethan Collars That Your Pets Will Love To Hate