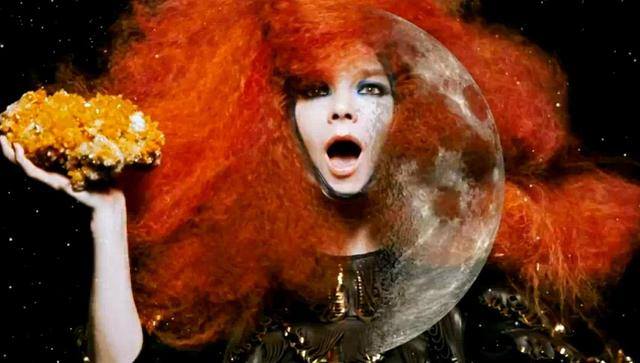 The big news about Björk’s ninth studio album, “Vulnicura,” shouldn’t be the fact that she released it suddenly online, two months before its planned appearance, in response to having it leaked prematurely. It should be that in her latest songs, Björk leads as much with her heart as her brain.

“Biophilia,” the album-and-apps package she released in 2011, was a grandly cerebral edifice of cross-mapped concepts: music, science, pedagogy and technology, from the mechanical to the virtual. “Vulnicura” has intellectual parameters of its own. The songs conceal or completely disregard the signposts of pop, and they linger in dissonance and ambiguous tonality. Throughout the album, Björk uses a severely circumscribed palette: just string orchestra, electronics and voices. But it’s not the musical complexities that register most immediately: It’s the sorrow, anger and tenacity. The album cover shows her encased in shiny black with an open wound in her chest.

On Facebook, Björk called “Vulnicura” “a complete heartbreak album.” (It reflects her breakup with the artist and filmmaker Matthew Barney, with whom she had a daughter, Isadora, in 2002.) The lyrics booklet dates the first six songs chronologically, from “9 months before” to “11 months after.” The lyrics trace estrangement, bitter separation and resolve. They seesaw between the analytical — “Moments of clarity are so rare/I better document this,” in “Stonemilker” — and the raw: “My soul torn apart, my spirit is broken,” in “Black Lake.”

It’s an album of ballads, some of them extraordinarily slow, built around Björk’s declamatory melodies; there are verses and choruses in there. But the music rarely supports her in any typical sense. “Stonemilker” and “Lionsong,” which open the album, are the closest thing to Björk’s previous recordings, using elegiac strings and twitchy electronics. From there, the tracks are more likely to envelop her, abandon her, destabilize her or battle her. “History of Touches,” a last-chance love song, uses only watery synthesizer chords with their own, separate pulse, like someone else’s breathing. They’re programmed by Björk’s co-producer for much of the album, Arca.

In the 10-minute “Black Lake,” the strings offer austerely distant counterpoint and, at times, long-sustained chords that conjure stretches of unbearable solitude; march and dance beats heave up at times, then disappear. For the first three minutes of “Family,” as an increasingly agitated Björk asks, “Where do I go to make an offering/to mourn our miraculous triangle/father mother child,” her voice hovers over unpredictable thuds and an inexorably swelling cloud of dissonant strings and electronics, an almost unbearable tension. “There is a swarm of sound around our heads,” she sings later in the song. “Notget,” which insists “Don’t remove my pain, it is my chance to heal,” pushes against her voice with electronics that hint at Asian tunings and then with insistently jabbing strings.

“Atom Dance” has a science metaphor that could have come from “Biophilia”: “We are each other’s hemispheres,” Björk sings, joined in staggered counterpoint by Antony Hegarty of Antony and the Johnsons. At first it’s almost decorous, repeating a five-note pizzicato figure; then it’s buffeted by flurries of percussion and string trills. “Mouth Mantra,” in which Björk sings about being silenced, starts out waltzing but goes haywire with ghostly voices and dizzying electronic crossfire. And “Quicksand” concludes the album with the sentiment, “When we’re broken we are whole/And when we’re whole we’re broken.” It doesn’t provide any kind of resting point; the strings circle through unresolved chords and the rhythm, hinting at breakbeats, jitters and races ahead.

Even amid the most abstruse music, these songs have an emotional immediacy. The physicality of Björk’s voice and the strings are even more striking against the impersonal electronic sounds, all the better to reveal the interior landscape of heartbreak and healing — not a simple story, and all the better for it.

Björk has announced that her ninth album will be called ‘Vulnicura’ and will be released in March.

Last night, she posted details of the record to social media, including a handwritten note highlighting its release date.

Well, this is one way to deal with a leak. Björk’s much-anticipated new album Vulnicura wasn’t supposed to come out until March, but it leaked over the weekend. She’s still planning to release the CD and vinyl editions of the album then, but Vulnicura is out on iTunes this very minute. Pitchfork reports that will be out on iTunes worldwide within the next 24 hours. For now, though, you can get it from the UK version of iTunes. You might have to temporarily change your iTunes’ geographic settings, but you should not let that stop you from grabbing the album as quickly as possible. Spoiler alert: This thing is pretty incredible. You can cop it here. (UPDATE: Here is the US iTunes link.) Meanwhile, Bjork has written an open letter about the album and its creation, and you can read it below.

“dear websitefolks , fans , tweeters and my music supporters on all the sorts of www :

vulnicura will be rolling out worldwide over the next 24 hours !!

i am so grateful you are still interested in my work !!

i appreciate every little bit !!!

i guess i found in my lap one year into writing it a complete heartbreak album . kinda surprised how thoroughly i had documented this in pretty much accurate emotional chronology …. like 3 songs before a break up and three after . so the anthropologist in me sneaked in and i decided to share them as such . first i was worried it would be too self indulgent but then i felt it might make it even more universal . and hopefully the songs could be a help , a crutch to others and prove how biological this process is : the wound and the healing of the wound . psychologically and physically . it has a stubborn clock attached to it .

there is a way out

and then a magic thing happened to me : as i lost one thing something else entered . alejandro contacted me late summer 2013 and was interested in working with me . it was perfect timing . to make beats to the songs would have taken me 3 years ( like on vespertine ) but this enchanted arca would visit me repeatedly and only few months later we had a whole album !!! it is one of the most enjoyable collaboration i have had !

towards the end of the album i started looking around for a mixing engineer and was introduced by a mutual friend of ours , robin carolan to the haxan cloak . he mixed the album and also made a beat for one half of “family” . together with chris elms the engineer we kinda formed a band during the mixing process and this is the album we made !!!

i do hope you enjoy it

. i also would like to thank robin , his generous approvals gave me more courage to complete this as is .

and my group of songswapping / dj friends : the right tune can truly cure : ta for those sonic ointments

but most of all i would like to thank my team : james merry , derek birkett and emma birkett . rosemary and elisa . this album could not have been done without you”

10 of The Most Famous Animals in History

The World’s Worst Book Covers and their Horrible Titles