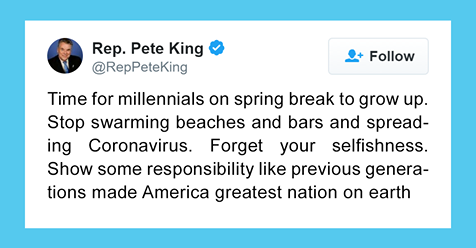 Apparently, the recent events regarding the coronavirus pandemic seem to become a battlefield for the generations yet again.

A lot of media outlets have published catchy titles and blamed millennials for taking the pandemic lightheartedly and swarming the beaches despite health officials’ recommendations of self-isolation and quarantine.

Firstly let’s state the fact that there seems to be a lot of confusion between different generations. Most sources state that millennials, or Gen Y, are born between 1977 and 1995, while others argue that they’re born between 1982 and 2000. The generation born after them is known as Generation Z, iGen, or Centennials. “One of the things that terrifies me now is, as this is spread in the west is, there’s this sense of invulnerability among millennials.” Retired psychologist Arvin Engelmaan says it’s normal among psychologists to expect a lack of solidarity between generations. “It’s a vicious cycle,” he says. “Everyone tends to forget different generations are dependent on one another in so many complex ways. We as people should seek to overcome our differences and all unite as one, instead of avoiding shared responsibility and putting blame on each other.” B&W Collages That Reveal Their Figures’ Inner Self