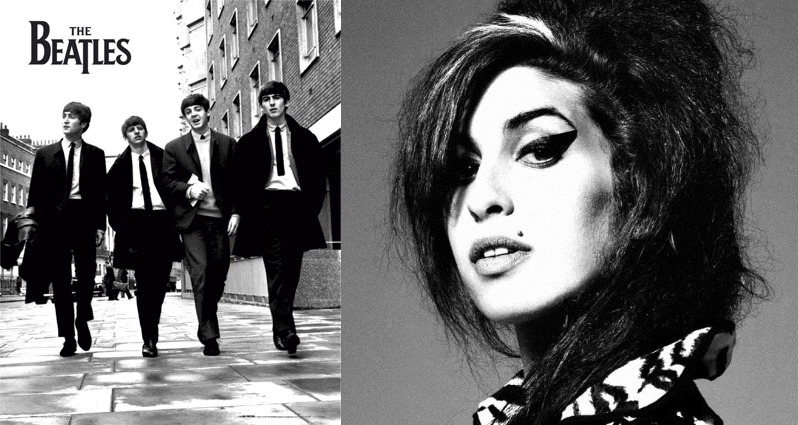 Although denied, the lyrics “how could it be/I’m the only one who sees/your rehearsed insanity” and “I don’t owe you anything”, at a time when surviving Nirvana members fought over royalties and song rights with Courtney Love, make it pretty obvious.

9. Me and Mr Jones – Amy Winehouse

Since the release of the song, plenty of rumors were floating about the song until Nas finally confirmed it was indeed written for him. No need for that though, as the lyrics were pretty much up to the point : “Side from Sammy you’re my best black Jew … / Mr. Destiny 9 and 14 / Nobody stands in between me and my man / ‘Cause it’s Me and Mr. Jones.” Nas’s real name is Nasir Jones, like Amy he was born on September 14 and he has a daughter named Destiny.

After Andy Warhol’s request, Velvet Underground’s frontman Lou Reed wrote the song for the artist’s superstar Edie Sedgwick. She was one of the frequents of Warhol’s Factory loft in New York and apparently a great femme fatale : “Here she comes/You’d better watch your step/She’s going to break your heart in two/It’s true.”

After more than 40 years of speculation, Carly Simon finally admitted to People Magazine that the song was written about famous actor Warren Beaty…well partially! The singer said that only the second verse of the song is referring to Beaty : “You had me several years ago when I was still quite naive / Well you said that we made such a pretty pair/ And that you would never leave / But you gave away the things you loved and one of them was me / I had some dreams, they were clouds in my coffee/ You’re so vain/ You probably think this song is about you”

Although McLean has generally avoided to respond to questions raised about the song’s lyrics, he stated that he first learned about the plane crash that killed Buddy Holly, Ritchie Valens and The Big Bopper, when he was folding newspapers for his paper route on the morning of February 4, 1959: the song’s line “February made me shiver/with every paper I’d deliver” says it all. Since the release of the song, the day of the rock and roll’s musicians’ death, February 3, 1959, became known as “The Day the Music Died”, after McLean so referred to it in the song.

The Chelsea Hotel, located in the Manhattan neighbourhood of Chelsea, had seen its share of big names back in the day: Dylan Thomas, Sid Vicious, Jackson Pollock were few of them while Leonard Cohen and Janis Joplin were also two of its frequent visitors. Chelsea Hotel No 2 is a tribute to the artists’ short affair although Cohen may have regretted it as he has stated that it is “the sole indiscretion in my professional life.” Some of the lyrics include: “I remember you well in the Chelsea Hotel/ You were taking so brave and so free/ Giving me head on the unmade bed/ While the limousines wait in the street/ Those were the reasons and that was New York/ I was running for the money and the flesh/ That was called love for the workers in song/ Probably still is for those of us left.”

4. Candle In The Wind – Elton John

Originally written in 1973 by Elton John and Bernie Taupin, the song honored Marilyn Monroe who had died 11 years earlier. In 1997, though, after Princess Diana’s tragic death in a car crash in France, John – a very close friend of Diana’s – revised the song in order to honour her. The singer performed the song publicly only once, at the funeral of the Princess of Wales, in Westminster Abbey on 6 September 1997 , in a really emotional performance that featured the line “Goodbye England’s rose, may you ever grow in our hearts.”

It took him a long, long time but Neil Diamond finally admitted in a 2007 interview that his hit was inspired by John F. Kennedy’s daughter, Caroline. Going even further, in a 2011 interview Diamond revealed that a picture of Caroline riding a horse on the cover of LIFE Magazine is what triggered him to write the song, featuring lyrics like “Hands, touchin’ hands/ Reachin’ out, touchin’ me, touchin’ you.” Considering that Kennedy was 12 years old when the song was released, this is a bit creepy!

Written by Paul McCartney for John Lennon’s son, Julian, to comfort him during his parents’ divorce, the song was originally titled “Hey Jules”. Julian’s mother, Cynthia, recalled McCartney’s gesture: “I was touched by his obvious concern for our welfare … On the journey down he composed ‘Hey Jude’ in the car. I will never forget Paul’s gesture of care and concern in coming to see us.” Beautiful.

Ok, this is probably our favorite story! Written by Eric Clapton and Jim Gordon and originally released by their blues rock band Derek and the Dominos, the song was inspired by classical poet of Persian literature, Nizami Ganjavi’s The Story of Layla and Majnun, a tale about a young man that fell in love with a woman that was married to someone else, and eventually went crazy with desire. Clapton saw himself in the story, as he was secretly in love with Pattie Boyd, the wife of friend and fellow musician George Harrison! The story gets even better : in 1977 Boyd divorced Harrison and married Clapton two years later – The Beatles’s guitarist even attended their wedding party with Ringo Starr and Paul McCartney ! Amazing.

Delightful Portraits From The 1900s Capture Victorian People Being Silly