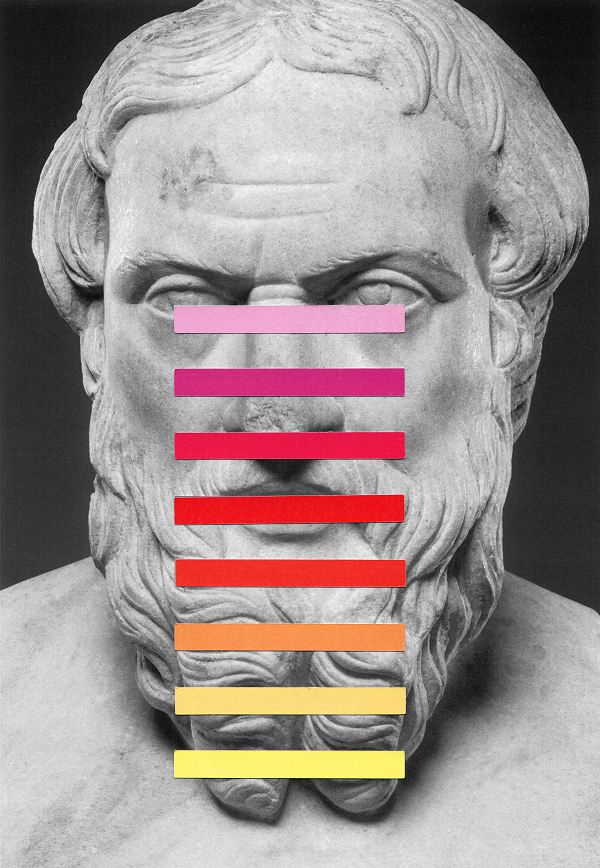 Chad Wys is a conceptual artist and designer from Illinois.

His paintings are experiments in composition, color, and form. He uses a wide variety of media and often inharmonious color schemes.

His subjects are depicted in unusual colors, but their original context is typically preserved. ‘By retooling the object I intend to add new layers to the the original,’ he says.

We collect our favorites 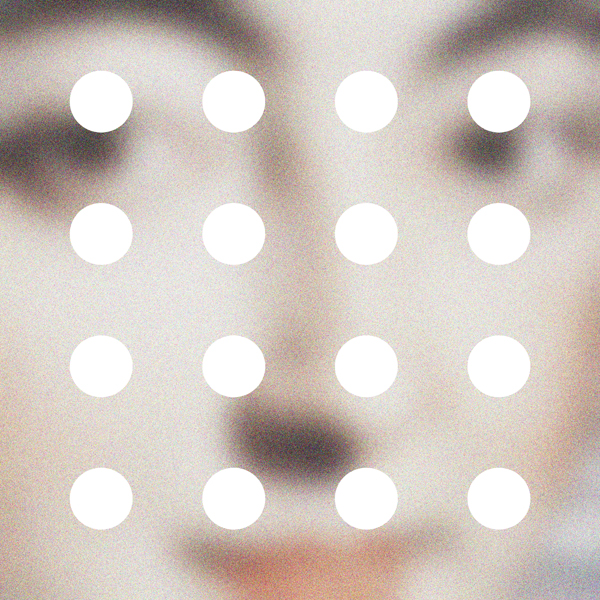 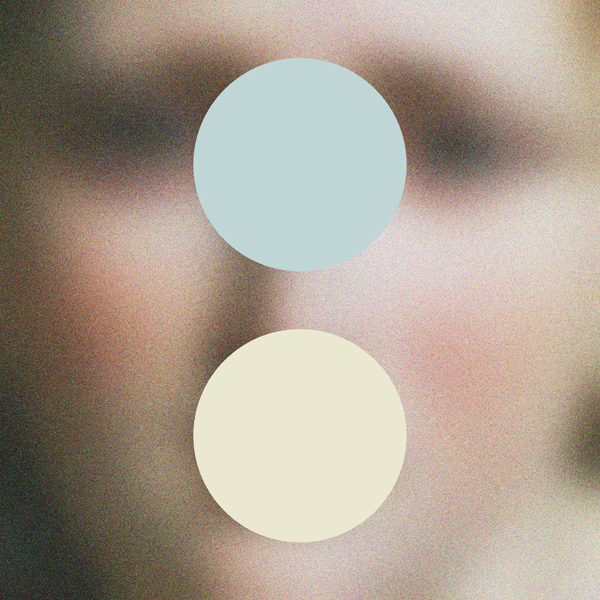 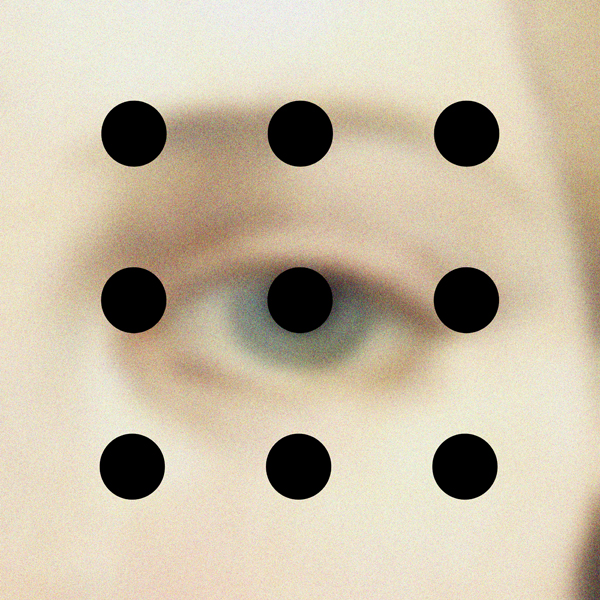 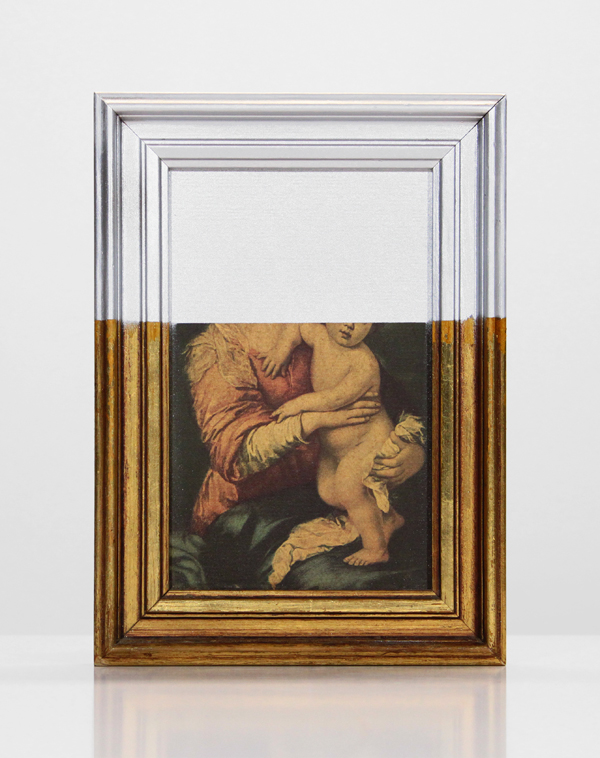 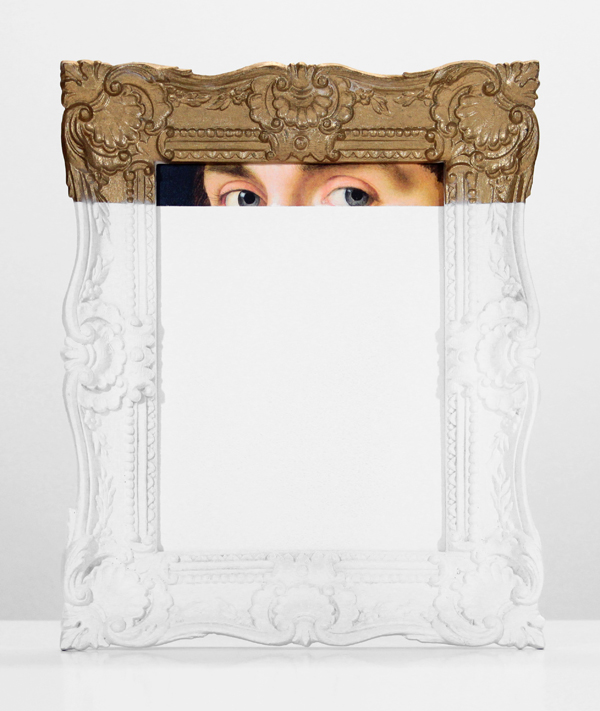 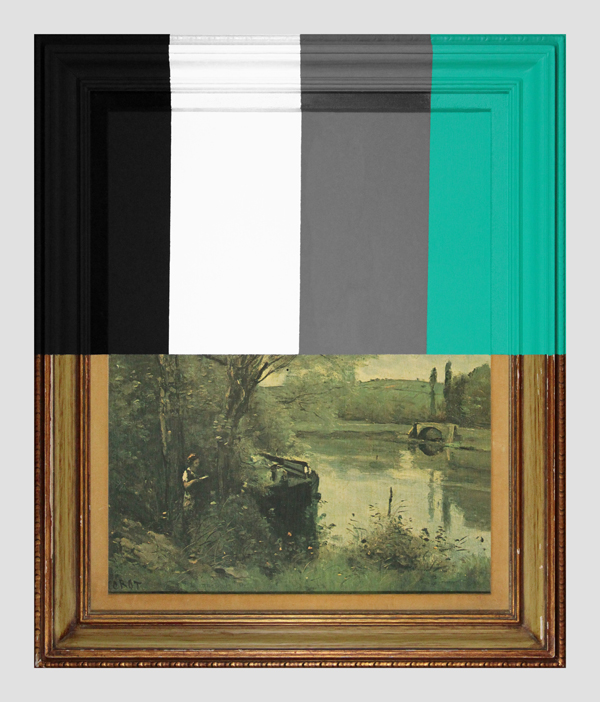 The Girl With Stars In Her Eyes 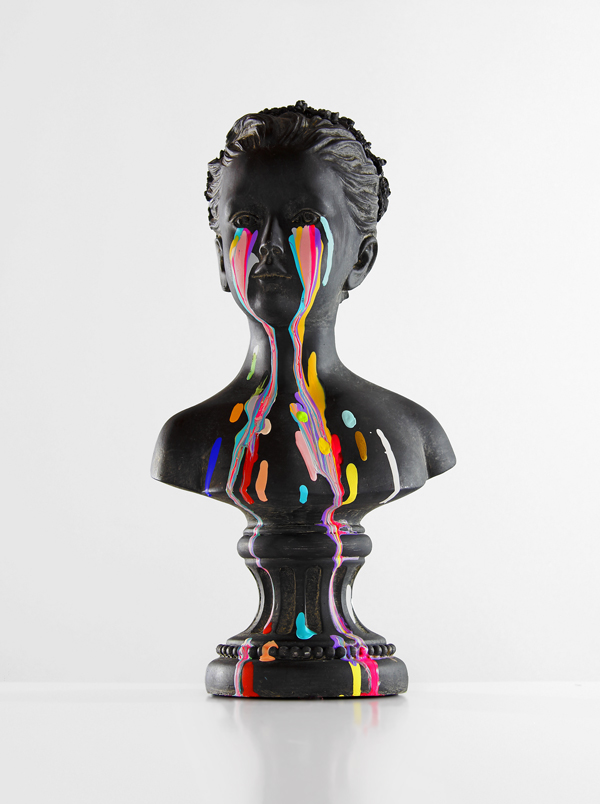 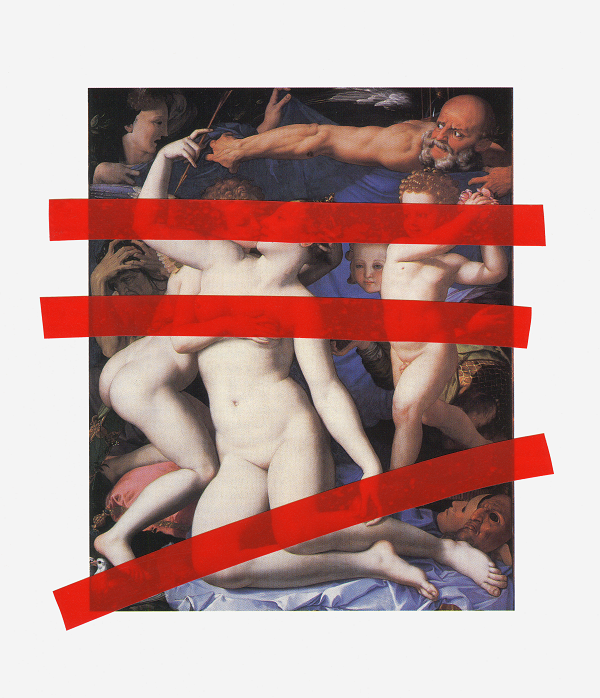 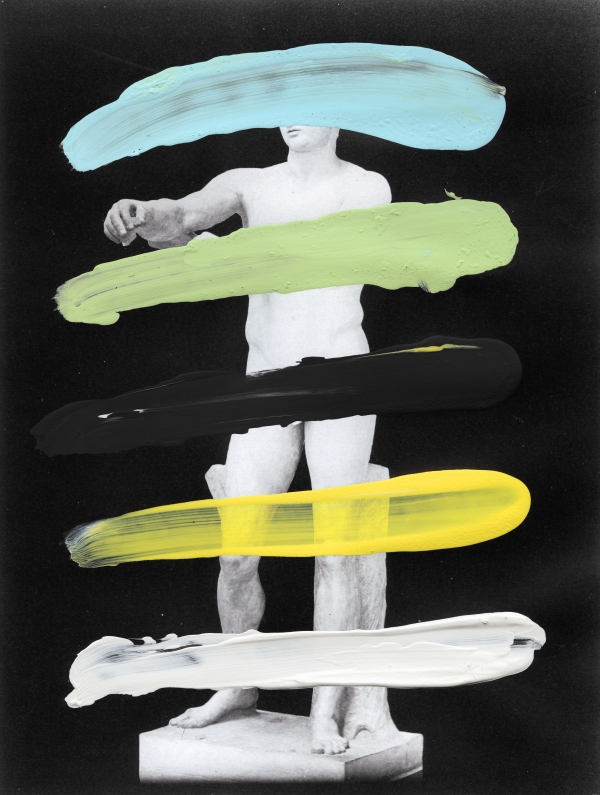 Sculpture with a Spectrum 2 (collage on paper, 2014) by Chad Wys 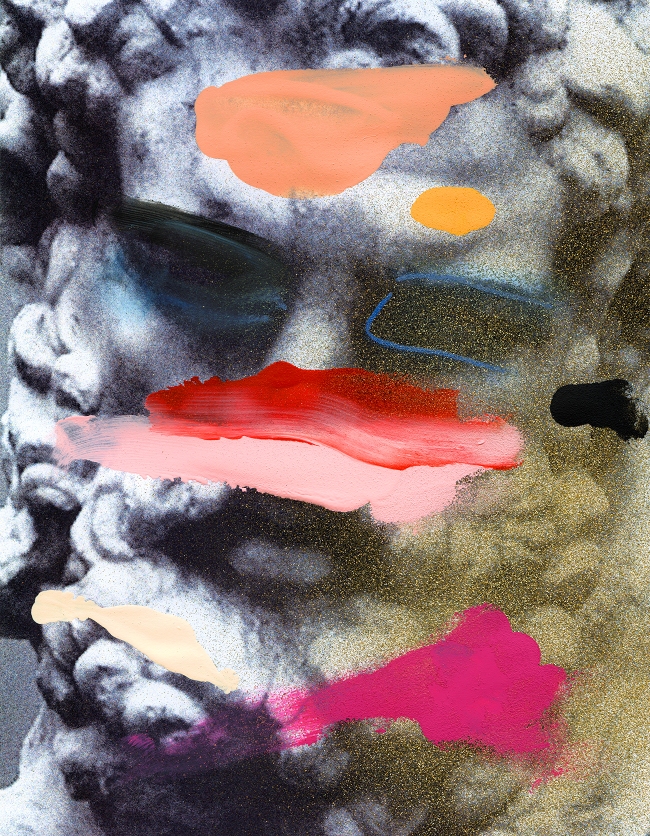 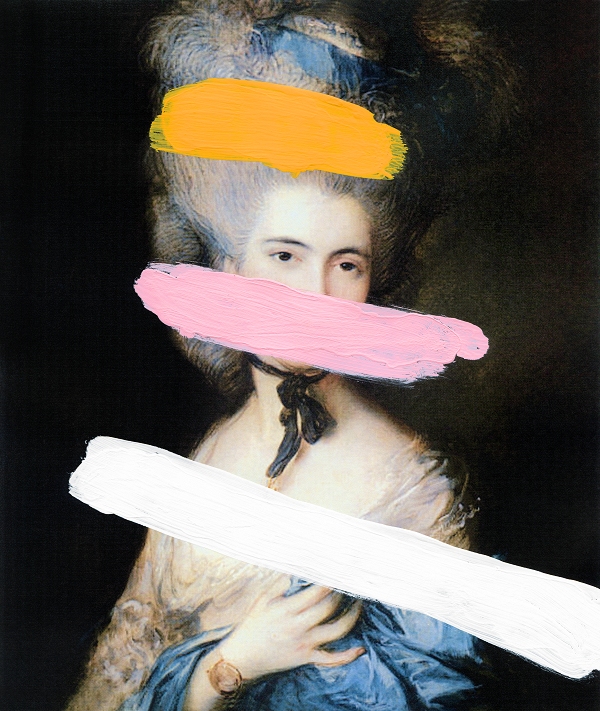 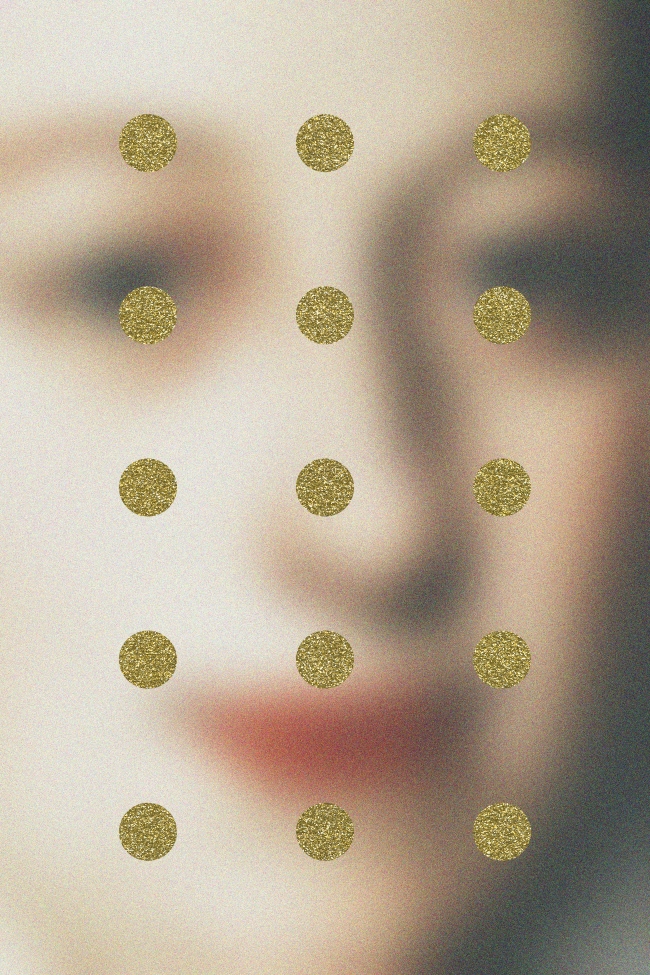 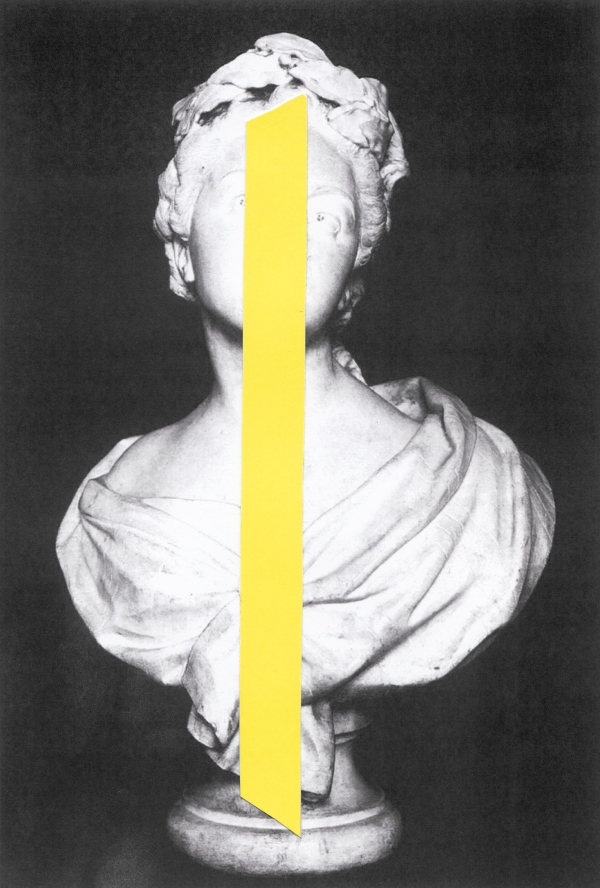 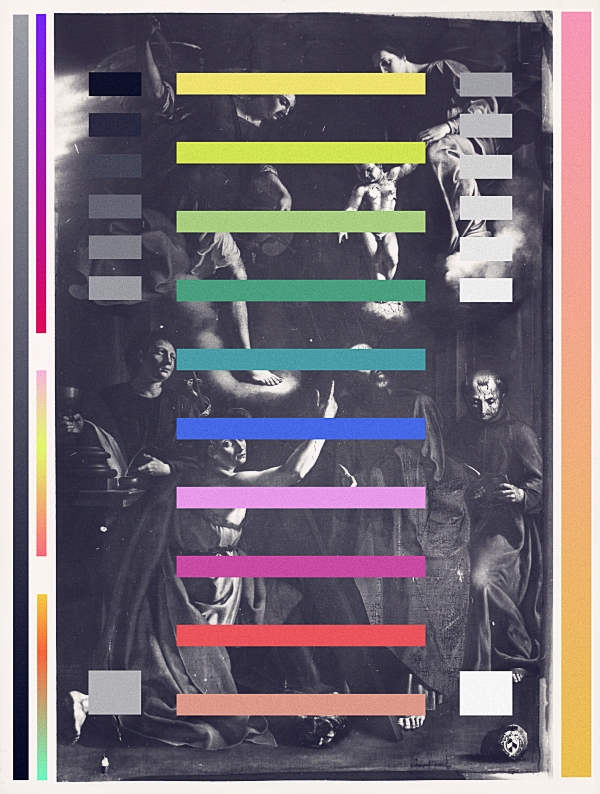 (Learn to Pronounce My Name)
​I was born in Illinois in the fall of 1983. From an extremely early age picture books devoted to 19th and 20th century painting were more valuable to me than any toy. The impressionists were my idols and museums were my arenas. This naive fascination with art and its history would persists in varied degrees throughout my adolescence, contributing to a full-blown vocation in adulthood. I would go on to graduate from Illinois State University in 2011 with a Master’s degree in Visual Culture, a discipline with a multi-pronged emphasis on art history, visual theory, and philosophy.
It was during my time at University that I developed enthusiasm for contemporary art, where once I had harbored little patience and more than a small amount of resentment. Like many, I feared that which I did not possess the intellectual framework to understand. And while challenged by professors I became enamored with conceptualism—and movements like Dadaism and minimalism—most of all, and I became fully engrossed in postmodern thought.
From this initial exposure to recent art history I began to realize my own creative urges had always been active beneath the surface; in some ways dormant but in other ways persistently developing and sparking out. I had been active in graphic design since I first touched a computer at the age of seven or eight, I had always drawn but not well, and during my undergraduate years studying literature and art history I had even begun to paint in earnest—at first landscapes and later nonrepresentational abstractions. But art-making as a critical tool for grappling with socio-political concerns had never been a consideration of mine. It was in graduate school that I developed a use for visual art, with a distinctive vocabulary suitable for not only sharing ideas but provoking serious deliberation in the viewer, as a means to finally manifest my complicated philosophical concerns about objects and images—and indeed art itself. 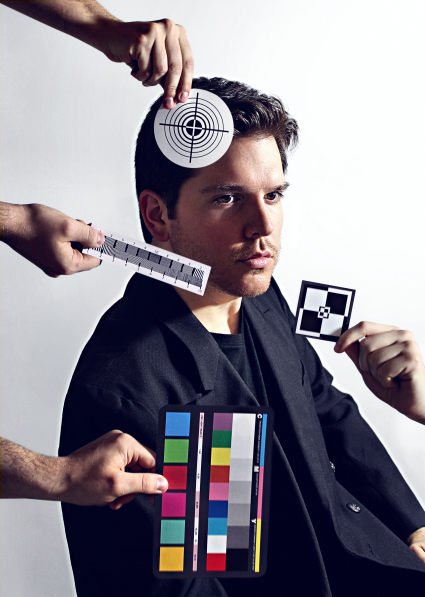 At its broadest point, my work concerns the examination of visuality: of images and objects, decorations and art and how the manifestations of the reproductions of these materials come to influence our everyday experiences.
Appropriation as a methodology came naturally and early to me since my academic and personal interests had for so long involved the study of visual production. When it came time to develop a methodology, I simply adapted the technique of literary citation to the realm of the visual. My affinity for Marcel Duchamp, Man Ray, and the other Dadaists, along with the recent Pictures Generation of the 1980s (including artists like Sherrie Levine and Richard Prince)—all appropriators—were tremendous stylistic and intellectual influences in this regard.
Ultimately, it is through appropriation that I’ve found the most direct line to the problems that concern me above others. Sourcing, displaying, and adapting materials from my urban environment has become both my process and my methodology for dealing with the culture, and the cultural information, I wish to critique.

At its core my work is concerned with reproductions, or the inferior physical or digital iterations of various visual referents, and the objectification of visuality and experience that ensues under the authority of different users and contexts.
The industrial revolution meant the proliferation of mechanical reproductions on an enormous scale, but in the age of the Internet reproductions, which are now digitally transmitted instantly and endlessly, are more present and more malleable than ever. As observers we must be as vigilant as ever to distinguish between aesthetics and context, form and function, and the re-presentation of likenesses and the disassociation from referents.

Through a multidisciplinary approach to media, I seek to blur the boundaries between the material and the digital. I seek to merge and to experiment with as many mediums as possible in an effort to engage the viewer in a continued and more elaborate consideration of visual information, objects, images, art, and decorations and how each comes to be manipulated in culture and how each impacts our experiences therein.

My readymade works frequently deal with the re-contextualization of decorative art objects. By retooling the object and then re-presenting it for the viewer I intend to elaborate on the conversation that takes place between the observer and the reproduction in its “initial” state. Through the reclamation and manipulation of these objects I mean to acknowledge, to underscore, that our possessions can, and often do, manipulate us. In so many innumerable ways the bric-a-brac of our lives becomes a unit of measure of our own worth—I wish to subvert and to question this measure. I enjoy infiltrating this territory of being and I revel in pointing to the superficial and the wonderfully imperfect character traits in all of us.
Apart from an interrogation of art and its history, my work is also a investigation of mark-making and by extension an experimentation in composition, color, and form. I am curious about the use of marks to signify complicated contextual queues and to signify potentially life-altering deliberation. Peripherally, I am interested in color dis/harmony, and the function of color and forms (either together or separately) to convey purpose, meaning, and experience. I’m acutely curious about mark-making such as collage in conjunction with recontextualization, or appropriation, along with the absence or presence of an “original.”
Through a variety of media I have chosen as my inspiration a color palette that is at times complimentary and at other times purposefully contradictory, or seemingly “destructive.” The material destruction of an object is subordinate or altogether inferior, in my mind, to the overall effect created by the aesthetic-emotional experience of the reclaimed and marked object or image. I openly play with the allure of foreign and aggressive new colors and forms, inviting these technical elements into otherwise undisputed familiar and traditional visual territory. Barriers and obstacles are thereby erected between the viewer and the object through which one must negotiate an understanding of what is both present and hidden. What does the creation of new meaning tell us about old meanings, or meaning in general?
Despite everything, and true to my postmodern roots, in the end as in the beginning I leave the activity, reception, and understanding of my work entirely in the viewer’s hands. It is meant to mean different things to different people who are at different stages of understanding.