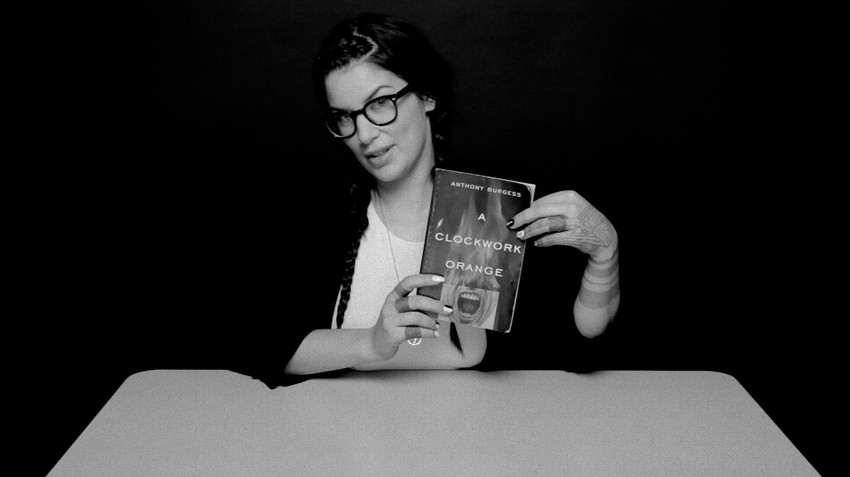 The Bibliotecaphilia exhibition opening at the Massachusetts Museum of Contemporary Art(Mass MoCA) this week features filmmaker Clayton Cubitt’s provocative Hysterical Literature video series, which depicts women reading literature aloud and orgasming. The show, which integrates the work of six artists, examines the role of the library in the digital age, probing the relationship between the physicality of traditional libraries and books and the immateriality of textual content. Hysterical Literature will appear alongside Jonathan Gitelson’s “Marginalia,” which invites viewers to peruse shelves of annotated books, and Jenna Priebe’s elaborate book sculptures, along with other works.

Cubitt’s videos have been available on the Hysterical Literature website since 2012, butBibliothecaphilia marks their first appearance in a museum. The videos are stark, shot in somber black and white. In each, a lone woman sits at a table, introduces herself, and begins reading a literary work of her choice aloud. Beneath the table, an unseen hand stimulates the woman with a vibrator. Eventually, she becomes too aroused to continue, climaxes, and repeats her name and the title of the work she just read. Though “Hysterical Literature” toes a blurry line between art and pornography, Cubitt explains on the project’s website that “all of the artistic choices were made in order to reduce, as much as was aesthetically possible, anything generally associated with pornography, or luridness.” Where pornography is staged, lending it an impersonal, stylized quality, Cubitt’s videos eschew facile exhibitionism. They are intimate, authentic, and personal, inviting us into their subjects’ most vulnerable moments: watching them feels tender at times, at times intrusive.

Cubitt sees the project as an extension of his earlier work, which puts portraiture into dialogue with distraction. He is interested, he writes on the Hysterical Literature website, in catching his sitters at their most human, their most unprepared, before they settle into an ossified pose or persona. Hysterical Literature is intended to distract the women it depicts, capturing them when they are least in possession of themselves.

But the series also interrogates the mysterious relationship between intellectual and physical arousal. The women of Hysterical Literature are stimulated by a force that is invisible, apparently immaterial: they seem to be sexually stimulated by the act of reading. The videos highlight the eroticism that can characterize intense intellectual engagement, an activity that weds mind and body, thereby transcending both.

By calling our attention to the sexual potential of the literary act, which binds reader to author despite their physical separation, Cubitt’s project is deeply physical, suggesting that reading can be bound up with touching. Hysterical Literature, in equal measure cerebral and sensual, is one powerful argument for the physicality of the literary encounter, and perhaps for the book as material artifact.

Photos of Carrie Fisher in The Famous “Slave Leia” Bikini Promoting “Return Of The...